Darn it. There's a hole in the front pocket of my pants. So I've gone and lost my stone. I need a new one now.
Funny thing about guns in movies, I just hate having guns on set. By "guns" I mean blank-firing guns. Real, firing, guns are completely verboten. But even the special blank-only guns are such a pain that I simply don't want to deal with them anymore.
First of all, talking to me about guns is talking to an Ohioan farmer in 1916 about guns. Guns are neither good nor bad in and of themselves but we have a LOT of rules governing their use. Never point a gun at anything you don't intend to shoot. No loaded guns near the house. Don't dry-fire that .22.*
These rules are burned into my DNA by my dad.
And the rules simply don't work for dramatic purposes.
In a movie you're going to be pointing guns at other people. You're going to be shooting at people for crying out loud (and shooting at robots, and monsters, etc.). And the rules for blank-only firing guns are pretty much the same for real guns. They're fantastically dangerous — with a semi-auto the loads have to be full loads, otherwise the action won't rack back. Bleh.
But that's not all. For a safe set you have to be very careful about where those blank-only guns are stored, when they're being used in a scene, how they're being used, and all-sorts-of-things. And guns are loud as all get-out so you and the crew and the actors all need hearing protection. Furthermore half the time you won't even see the flash of the gun when you shoot. Furthermore the blanks are expensive. Furthermore some guns are simply unpleasant to fire. Furthermore blank guns jam like crazy (because they need to be cleaned even more than real guns which are, in a way, self-cleaning because a bullet actually goes through them.)**
And I just don't have time to deal with it.
With plastic guns I feel perfectly safe just handing them out at the beginning of the day — no special training is needed, nobody needs to babysit them. When we've had a set where police are present you can tell they become much more relaxed when they realize we just have plastic guns. The worst thing you can do with a gun is give it to David Ian Lee (because he'll break it).*** 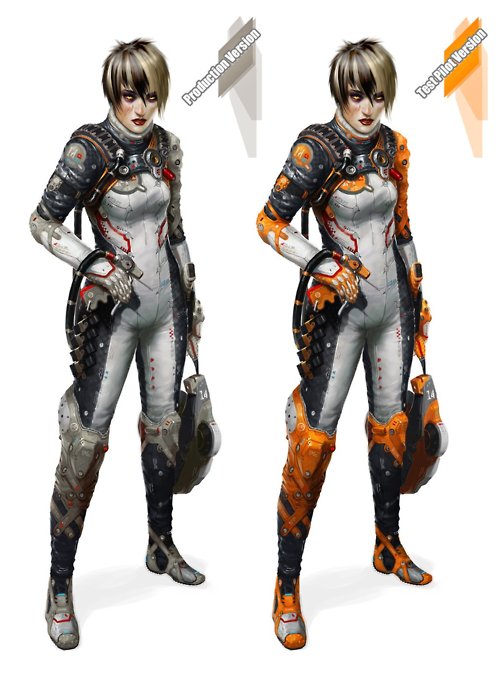 For the kinds of movies we make, actual modern-day firearms are not very sexy. Although a small pistol is very deadly in real life, they honestly do not play well on camera.
You know what plays great? An ax. It's got some heft to it.
Yup. We need bigger guns. And bodysuits that don't wrinkle.


*Seriously, those are the first three rules of guns I know. The "no loaded firearms near the house" is completely anachronistic to me as I grew up in the suburbs and guns were never fired outside there, but it's a rule from my dad's youth so I know it. The dry-firing issue is just that the .22 I had when I was young was my older brother's old rimfire and it would hurt the gun if dry-fired.
**That's not actually the reason — the reason blank guns are so gross is because so much of the powder and the yuk from the blank just fills the weapon rather than going out the front because the front is plugged.
***This is unfair to David Ian Lee because we managed to break more than 50% of the guns on Alien Uprising and his character wasn't even allowed to touch a gun. That being said, ask me how he broke my crowbar sometime.
Hey, while we're on the subject, why doesn't he have his own web page?
at 5/21/2012 05:46:00 PM

See, I'm the opposite. Blank-firing guns is the SHIT, man. Nobody yet today has been able to duplicate the recoil action(watching actors try to fake it is pretty embarrassing), and not having to color in the flash all over everything in After Effects is totally worth the $.78 per blank...

I use a REAL gun typically for the front shots so we can see the flash come out of the barrel, and I typically put a disposal Director of Photography on those shots. (me)

Kangas -- how do you deal with jamming? Do you just religiously clean the guns after each magazine?
Coloring the flash in AE is a pain, that I'll admit.

I never had a problem with jamming, and let me tell you, I'm not too great about cleaning afterward...I spray them down with cleaner afterward so they don't rust, but I don't take them apart at all. (my real guns are another matter)

But they fly out fine all the time. Don't know if I just got higher quality(read: more expensive) guns than you got or not.

My Berretta jams all the time. Of course, that could be the ammo too. But I'd just given up on the thing.

"Nobody yet today has been able to duplicate the recoil action (watching actors try to fake it is pretty embarrassing)..."

Exactly. Real guns and blanks are a hassle, but anything else just doesn't look right. It's more forgivable in low-budget stuff. But when I see a multi-million dollar movie with a cheesy toy gun shootout scene, it really irks me.

Now I'm a fellow who actually likes the look of 2D blood, so maybe my opinion is redonk here, but if an actor doesn't overplay the kick I think it looks about right.