I'm calling 2012 the Year of Revenue in the Pandora Machine. I've traditionally be very afraid of every damn cost that comes up and this year I'm being much more libertine about spending (small) amounts of money.
You might find you need a Flying Squirrel T-shirt. I'm just sayin'. 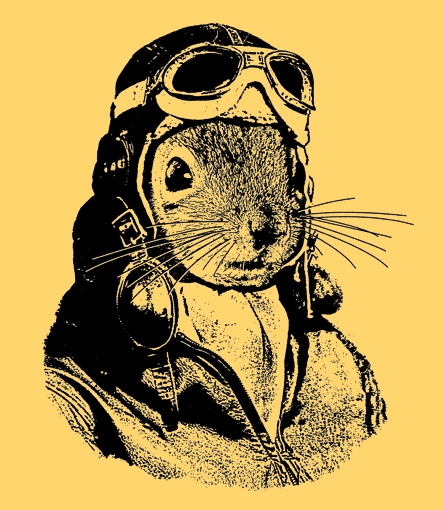 So you know if — and this is a big "if" — you could gross between $24,000 and $30,000 average on a feature film, you could make five pictures a year and have a business that's between $125K and $130K a year.
But the question here is how much would producing five pictures a year cost you?
So you've got a big "if" and a big "?" all in one business formula.
Now as for the revenue side of the equation: it would be nice, I mean really freakin' nice, if we could up that revenue to (say) $100K/picture without name talent in it. And the reason I'm against name talent is because name talent ends up costing you more than you can get for North American distribution. So we want $100K/picture without name talent. But we can't get that. So we figure we can get $24K worldwide. That's maybe a little conservative. But not terribly.
So let's pretend we're starting a business where we have $125K to spend but we have to make five marketable movies with that $125K.
OK, so let's look at expenses. Firstwise, there's me. And I'm not 100% sure how much I cost/year. But what I can do is add up all the rent I pay.
And so I think and I guess and I'm going to make the estimation that my so-called "fixed" expenses are somewhere around $35K/year. That's low, I realize, and it involves me not owning a car and suchlike. But I think that's about the right number.
So now we have $90K to make 5 movies with.
To put out 5 movies we need a new one written in less than a month. We need to shoot and post it in less than two months. A feature has to get picture edit and visual effects and dialog, music, and sound effects editing with a mix in less than two months.
That's more work than I can do on my own.
So. Will someone help me? For free? Working 40-hour weeks all year through? Well, is it worth it to them?
And how many people do I really need? Two? One for picture things and one for sound? Working full-time?
How much would that cost in real life? If you're talking two people who can do more than one thing each (picture edit, foley, cgi, etc.) and you pretend that minimum wage is $10/hour and that the actual cost is $12.20/hour when you include taxes and insurance and they're working (no overtime!) 2000 hours/year that's a total of $24,400 a year in costs for the employer (for an employee to take home less than $18K/year -- but they'd make up some of it in earned income credit).
So yeah, that's not an ideal job. But it's a job. And they better be fast. And self-motivated to hold it down. With no medical benefits. Oof.
But we're not done with the person's real costs. The fact is they need a computer and they need a chair and they need a place to sit and, shockingly, all those things cost money. And employee involves overhead. So let's say that they end up costing about $30K/year but the two of them cost $60K a year and that they can handle all the post duties -- picture editing, cgi, dialog, music, and effects editing, mixing and color - grading.
That leaves us with $30,000 to actually make the movies. Which includes insurance, cameras, lighting, locations, sets, costumes, props, transportation, and whatever costs are incurred with writing the movies. Five movies. $30K.
Of course, there's no profit in't. We've gone and defined it with no "profit". For profit we'd have to make six movies...

Yeah, welcome to hell. I'm not really sure how to make money on movies any more...it's pretty disheartening...

Any MORE? You see, you actually made money once on a movie. I never made a big payday!
So I'm "lucky". Or insane.
I'd go with "insane."

Yeah, once. But unfortunately, the money's gone. Cocaine and hookers really eats that shit up fast.

So you can see why I'm so hostile to the internet! It's killed all my coke and hooker money!

You should use coke and hookers to get investors. Then you could write 'em off!

I'm so coked out I could have sworn I saw a post referring to me, and replied to it, and it's GONE now! Man, I gotta get off these drugs!