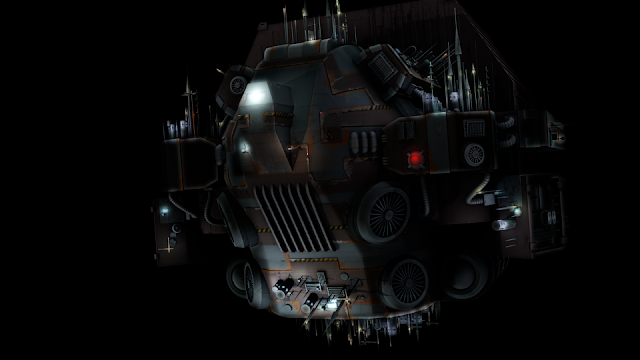 The direction we're going in here with Dolf Veenvliet and the Blender model of the Venom is to have the model lit entirely with its own lights. Which grooves me to no end.
I have found out things about paint pens. They're nice and they do totally work on plastic. BUT. It's difficult to get a nice coat of pain on something because the acrylic paint dries sort of tacky (even overnight) and the paint pen lifts up the paint as you try to do a second coat, resulting in no more paint being on the surface.
So it's all about brushes from here on out.
Which is too bad because I just love the lack of cleanup with pens and how much easier they are to use than brushes. That's just how things are.
We're going to put our models up as Creative Commons models. I'm a fan of the idea of sharing these great models with the Blender community.
With all of my years of filmmaking I'm missing four things. Here is the comprehensive list:


I suspect that the last two things were either lent to someone or got misplaced during the move of our offices. So maybe they'll just turn up? Who knows?
I do know this. My hamantashen level is very very low right now. Like dangerously low. And it's after sundown on a Friday so there's no way for me to get any until Sunday. Sigh.
at 3/09/2012 08:42:00 PM