I've probably made considerable noise of late considering on the fact that we absolutely must shoot and post a minimum of three pictures this year. Perhaps four. Well heck, if I'm dreamin' we should do five but them dreams ain't worth the hyper-paper they is written on.
What I have so far is Dragon Girl, then Joe Chapman's picture Alien Exorcism. After that we have picture called either "Alien Revenge" or "Alien Treasure" depending on the draft we're reading (written by Bruce Frigeri). 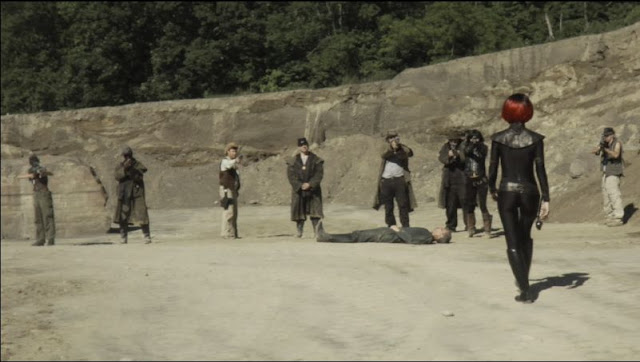 Before all that comes to pass, o'course, we must finish Android Insurrection. I have plans to do that in three weeks. Don't know if we'll make it. I expect we'll have a finished cut, tho' we'll want to clean up some visual effects before delivery.
++++
The first thing I won't be makin' a deciding on is what to do with this whole Apple Final Cut Pro debacleation. We'll edit at least one more picture in FCP (that'd be Dragon Girl). And if things ain't be worked out by comes summertime, we'll maybe find ourselves on the side of the fence where Premiere doth grow all pretty and gentle-like.
Yes, I've been re-watching all of Firefly.
at 12/26/2011 06:24:00 PM

And multiple pictures per year? Man, kill me now...I could never do it, even if I had no job(wait, I HAVE no job!)...maybe with no family, and if I could drink the blood of babies to rejuvinate(sp?) my spirit...

The trick is to get other people to edit the picture for you.
Plus, you know, drinking the blood of babies. Mmm... delicious!