So, I was talking with a friend the other day -- a guy who is a professional composer but (and I hope you're sitting down for this) writes music on paper. I know, right?
And my point was that I'd never tell some 20-year-old kid who wanted to be a professional composer anything other than "You have to be able to deliver complete, recorded, scores." And by that I mean you have to be able to do what my friend would call "synthestration". You know, using synths and sound libraries to create complete - sounding scores which can (sometimes) pass for real orchestras recorded specifically for the project. Why do you, as a new and young composer, need to do that? Because that's most of the work that's out there.
To make matters weirder, I actually know two composers who write on paper. Now note, when I'm teasing them about "writing on paper" they do actually use Finale and Sibelius so it's not like they run screaming from computers altogether. But they don't do any "synthestration".
There are, however, specialists whose day jobs consist of synthestration. I think they mostly work in Hollywood. Plus, lots of commercial music is composed by ateliers -- music houses where a "master" composer has a number of "journeymen" and apprentices. And sometimes it's the journeymen (or one of the journeymen who serves essentially as the master's assistant) who does the synthestration.
++++ For the last few movies I've done I've been using the Video Copilot scores to build our music cues. And, especially when mixed with the scores I've done for previous films and a couple plays, they work pretty well.
But frequently I find I need just a little more. One counter-intuitive thing about scoring for film is that a shocking amount of the score has to sound pretty bland and boring by itself. That's because, essentially, the "melody" of the music is the dialog that goes on top, not an instrument that will make the dialog harder to hear. And the intelligibility part of the dialog is right where you'd go and put a melody (if you had one).
That's why drones and bits of percussion are so popular in film scores.
And, of course, the music has to go well with the sound effects. Indeed, they should all be part of the same "score". On big Hollywood films the two departments -- sound effects (or sound "editing") and music -- tend to "compete" for prominence in the mix. That is, on the face of it, a horrible idea. We're all making one movie here guys, not competing for screen time. Right?
Anyway, this does mean that I require a professional way to make orchestral scores. I was meeting with a guy who produces music for commercials the other day (the meeting wasn't about music, but about real estate) I asked him "What do your composers use?"
He said "Mostly Logic, a couple Digital Performer users, and one or two ProTools."
So for the next couple days I'm all thinkin' hmm... maybe I should get Logic or DP to compose scores on?
But no, forget that. I'm a Samplitude user dang it! And it's not Logic or DP or ProTools which actually make the sounds you use. No, most of those things are VST plugins anyway.
But what I do need is a library. And honestly what's most important to me in a library is decent percussion. Because a couple tubular bells, a tympani, and maybe one of those big pieces of metal you dunk in a tub of water is 3/4 of film scoring.
The rest of film scoring is decent strings. And because we make sci-fi movies we are more interested in string "effects" than soaring strings (although we do need those, too.)
And the thing is that we live in a golden time for orchestral sample libraries. If you're good, and you pay a lot of detailed attention, you can make an orchestral score that sounds a lot like a real orchestra. There's a whole subset of composers who as a day job make "synthestrations" of other people's scores. They can get paid very well. The work involves going through every dang part and making sure each phrase is played by the right sample and massaged so that the dynamics and portamento and all the other details are just right.
Sometimes it's easier to just hire good players, right?
But an orchestra (the real kind) is fantastically expensive. Even if you go to Eastern Europe to record one you'll pay at least $15/hour/musician plus some amount for the space and the recording. And that's after you've split out your parts and made copies for everyone. So it's actually economical to throw a couple thousand dollars at a "synthestrator" -- especially if you're making a demo for a client to listen to -- a demo which could result in them giving you enough of a budget to hire an orchestra. (Even better if that synthestrator works for you full-time.) 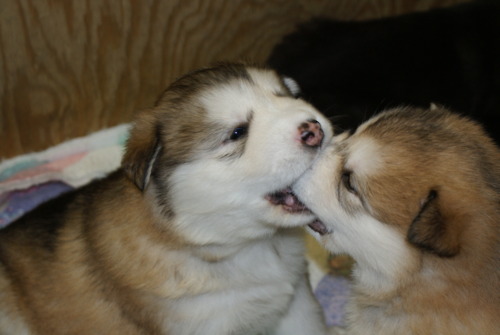 The joke there is that if you synthestrate a score and then record an orchestra over it, you may likely find that you'll want to mix the two together. Adding some cellos from a sound library to the live cellos might be just want the client really wants to hear.
One thing that clearly makes no difference at all is whether you work on a Mac or a PC. Except for Logic and Samplitude, all the programs people use are cross-platform. Samplitude is PC only, Logic is Apple-only.
So, where does this leave me? Well, the least-expensive way for me to go is to simply upgrade my Samplitude system to the next version. I think that's just four hundred bucks. It comes with 70GB of samples and such and can theoretically read my old Gigasampler discs through an add-on application called Independence (although apparently it doesn't understand the "note off" parts of the .gig files so, er, no). But it is a big ol' orchestral library.
Still, with VST instruments like Kontakt it doesn't matter what application you're running (DP, ProTools, Logic, Samplitude) -- you can load 'em up with one of the gazillion sound libraries out there and off you go.
And there you have it. Everything I know.
at 12/01/2011 07:15:00 PM

Email ThisBlogThis!Share to TwitterShare to FacebookShare to Pinterest
Labels: composing