Nominally I'm not such a fan of cloudfunding things. But when it comes to, say, somebody making a watch or something which takes a bunch of pre-order for them to make, it does make sense.
The main cloudfunder, Kickstarter, is an "all or nothing" model. "All or nothing" is the traditional way to fun feature films too -- you start "getting" money from investors in the way of promises that if you get enough promises for the entire budget, they'll go ahead and put the money in.
This is also how movies lose their financing at the last minute -- investors pulling out.
But the advantage to the investors is that you don't start spending their money on foolishness without all the funding in place, potentially losing all their money and never raising any more.
Here's a chart from here. 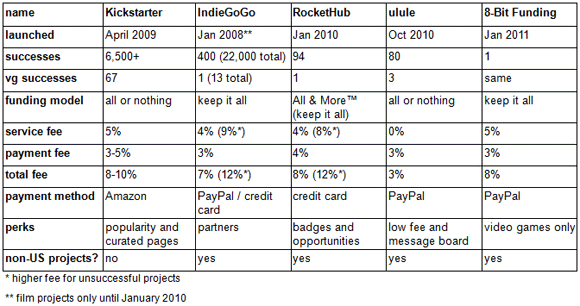 Rockethub is the seeming newcomer in this area. But IndieGoGo has slightly lower fees (if you make your "goal").
But you see, Pandora Machine doesn't have a built-in fan base. Everybody in my office insists there is one, but half of them will also insist that unicorns exist (the other half say the werewolves chased them all away). So I'm not so sure that putting up some animations of dragons will really get a bunch of people to donate twenty bucks each to us.
Maybe naked people will do the trick...
at 12/10/2011 11:58:00 AM