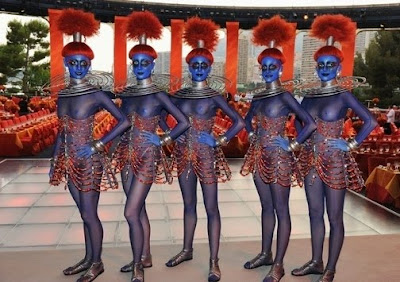 Apparently when I see a movie I mostly like I start complaining about it rather than praising the parts I like. That's a negative attitude. But I really didn't think the "Office Space" comedy it starts as was the right tone to set up with. It makes the lead character a bozo when really he needed to have something not just goofy and goof-up about him.

But that's not my real complaint.

I like that they set up the guy as a bozo--such a lame-ass middle-manager that he only gets promoted with the help of the father-in-law.

None of the characters (human or otherwise) start off too sympathetic, so when I started feeling for a few of them, it was almost like another plot twist.

You're totally right about the mech. Should have paid the aliens for labor instead of weapons. Pretty serious plot hole, unless maybe the implication is that the aliens were too lazy to work security or the humans were too xenophobic to hire the aliens?

My problem with the beginning was that the movie starts as a comedy. Tonally that doesn't jibe with the rest of the picture. And I thought his wife was way too babely for such a schlub but my movie-going partners thought he was handsome.

And is there anything more evil sounding that English with a South African/Dutch-type accent, when the speaker is talking Government double-speak? I think that actually counts as more evil than Hans Gruber German with an English accent.