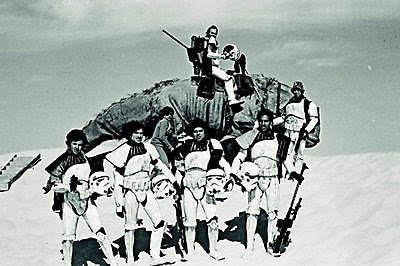 OK, one really sad thing about the Save the Cat software is that little windows will occasionally pop up saying things like "Still having trouble with your story? Email me at Blake246@aol.com. I'd be glad to help!" I never even met the man and that makes me choke up a little when I see it.

In any case, index cards are clearly the best way to go anyway. The software has some advantages but I think it's easier to get it all out on a board. Maybe it's because I'm a fan of Edward Tufte. But even Blake recomended the physical card method.

So I've been reading some script review sites like Script Shadow. Mostly they seem, and I think this is pretty obnoxious to say but I'll say it anyway, naive. I don't think these reviewers could tell a good script from a bad script at all. Their analysis is very film-school-y and has nothing to do with a sophisticated notion of what will play on screen and what won't.

Here someone reviews the screenplay to Rodriguez' Machete.

"Dusty beat up 16mm callbacks to 70s exploitation films are never going to play to anyone other than a niche audience."

Well, whether that's true or not, the review is snarky and analysis-free. It complains about how the movie is just this guy cutting people up with a machete but when the reviewer actually describes the setup and the plot I'm thinkin' "Hmm, that's sounds pretty good." The movie has a love story in the B line, the stakes amp up going into the 2nd act and then amp up again halfway through. So what's the reviewer complaining about?

I stand by my belief that there’s got to be something that keeps your audience’s interest in between all the gratuitous violence.

Um, what about all the political intrigue you just described and the love story? Aren't they the other things? There's also all the sex. Heck, maybe the screenplay isn't all that good, but certainly not for the reasons you cite.