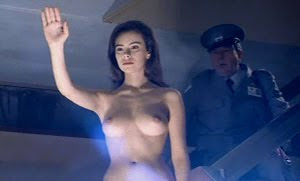 Today is paperwork day over in the Pandora Machine.

Ha! As it turns out, today is suckity-day nobody's doing what they're supposed to and irking Drew day in the Pandora Machine. Aargh. We're missing a drive. It's the Millennium Crisis deliverables drive. If we have to create an M&E for the domestic version of that picture we're in trouble. I think we have virtually everything else.

So in addition to everything else I have to do, I gotta deal with that. It's going to be a long day.

I'm going to get another webcam to use as security in our office. And we're going to have to be more fearsome about not letting people use the studio for whatever dumbass thing they want to use it for.

Somebody over at Freakonomics is overthinking District 9. I still say that there's no way that battle mech is only going to get 100 cans of cat food. Heck, I'd get in there with a couple of my own Nigerians and pay you 100 cans of cat food for just one hour of a prawn in that thing. If you kill all my enemies I'll give you a 200 can bonus.

Another idiotic review over at Script Shadow. Considering how stupid the reviewers are, we should feel lucky that there's no way anyone at a big or small studio would actually listen to their advice. I mean, sure, there are very very very very few people who really have any idea what a script even might end up being when it becomes an actual movie but these kids seriously have zero idea. They also don't know anything about Milton.

The producer's report for Alien Uprising reads that our cumulative "net" (after sales rep fees and laboratory costs) to date for "overseas" sales is $28,390.

When do I get my piece of that net?

As soon as it crosses $50,000, just like it says in the contract. It's pretty explicit. That's when everyone's participation kicks in, in fact. We don't use "profit" as a benchmark because we'd be charging office costs and all kinds of things against the picture (including interest, just like the studios do) and it would be virtually literally impossible for us to cross into participation.

Is it likely that we'll cross $50K on this show? Mmm... no. I'd say there is some chance if we get a television deal. Right now we are at $38,390 (including domestic) so even a $15K deal for TV (or a bunch of smaller overseas deals equaling more than 11,610 will bring us to the point where we'll start sharing receipts (note: "receipts", not "profits" as "profits" arguably would be negative.)

So this picture has been selling faster than other pictures, primarily because of how badly (apparently) Maverick wanted it to fulfill some distribution obligations it had. But as of now we would have to be selling into brand new markets we've never sold to before.

And yes, I am just waiting to get yelled at by some distributor for talking about real numbers on my blog.

I'll put up more pictures of naked people and cute cats to distract them.

And naked people and cute cats...