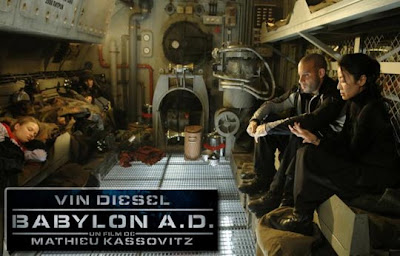 OK, so my career as a science-fiction director is now officially at an end. How do I know this? It's because I actually liked Babylon AD. I liked the skull helmets the bikers wore. I liked a lot of the ideas. Sure, some of the scenes were a tad clumsy. There were a couple bits which were imperfect story-wise. Some of the performances were a tad flat. But the story overall was quite good and the aesthetic details were very what I think of French science fiction -- like the embedded passport, and the shilds on the train while going through Chernobyl...
There does seem to be a spare act in the picture. Sometimes I don't mind those. Heck, my last picture had one... Hmm, maybe it isn't a spare act, just a funky way to get from act 2 to act 3 that wasn't quite as seamless as I'd like. But maybe I'm wrong. The ending doesn't really do a very big thing that you'd expect in a picture like this, it sort of ends on a meh. But other than that I kinda liked the picture. I'd make a mockbuster of it if that weren't such a spectacularly bad idea.

Oh what the heck, I've had spectacularly bad ideas before and made them into movies. I did a modern-dress Hamlet in Pixelvision didn't I?

Oh, I missed the first 20 minutes of the movie so I have no idea what happened in act 1. Overall structurally it's not such a bad idea. Perhaps it could be used as a model for a post-apocalyptic zombie picture.
at 8/18/2009 01:11:00 AM