How to Be a Motion Picture Director

The Pandora Machine Wiki is getting filled out. I envision it as a kind of thing where someone on our post-production team takes a look to see what the what we're doing in post. Mostly. That's what I see mostly.

Some things I learned from the Android Insurrection shoot: 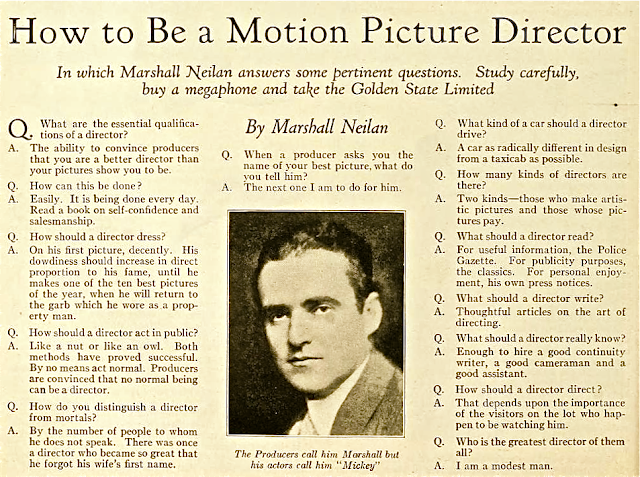 We should make a movie together. I love talking about guitar amplifiers.

Yes! A movie about two guys talking about guitar amplifiers. And then... and then naked androids murder them senselessly with laser swords... and then... um... ZOMBIES!

Good 1st ADs are awesome. Especially as your set gets bigger or more complicated.

I've actually worked with some good 1st AD's. But really, 2nd AD's are where it's at for me.

in response to bullet point #8 - don't be such a pussy

Actually I think that's in response to bullet point #1. I'm just gonna keep talking about amplifiers until it hurts... er... someone...

But if you don't have a 1st, your 2nd becomes the 1st by numerical default. In the end it all depends how we define the responsibilities since we all have different needs/wants in an AD.

We'll just tell the 2nd AD that the 1st AD is invisible or (Why are AD's never hurt in earthquakes? Because they're always standing in a doorway. Mah!) standing in a doorway somewhere.
That'll keep the 2nd back in the office working on tomorrow's call sheet and calling actors.

"...two guys talking about guitar amplifiers. And then... and then naked androids murder them senselessly..."

Yep. That totally sounds like a scene in a movie I'd make.

Chance -- you get to writin' that. "I'm tellin' ya, there are plenty blackface which sound just as good as tweeds!"
"Bull hockey, you can HEAR the tweed!"
"Heck, there are some mid-70's silverface amps which sound better than some tweeds."
"Sacrilege! I won't have you blaspheme in my house!"
WHACK. Androids kill both of them. Pick up a Fender Tele, and a '57 goldtop reissue with P90's and wail.