Rutger Hauer has a YouTube channel that has fun little interviews and lessons and such on filmmaking. Here's his DP, Christopher Gallo, on shooting with Canon DLSR's:

Right now we don't have an art director or costume designer for Earthkiller. It's not like we haven't done that before -- not had designers -- it's just a pain in the tuchus. 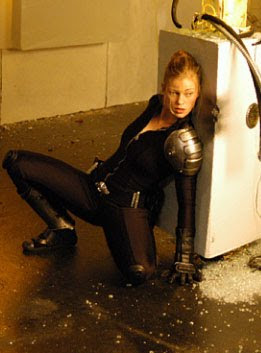 I've been looking at the costume design for this short movie Razorsharp. There are some very nice ideas. We're going to need to make some decisions about boots soon I think.

I went and hacked my GH1. Now I don't have to force a pull-down before editing with the footage. And presumably the compression is less than an unhacked-GH1. I better test the heck out of this before we shoot our next movie. Oh heck, you know I'll never do that. We still have a couple pickups to shoot on Day 2. We'll do our testing then! ;-)

Actually, today I did some long-ish shooting with the GH1. The Panasonics apparently don't have problems with their sensors overheating. So you can shoot with them for a long time.
at 6/25/2010 01:59:00 PM

Yes, sound is VERY important. But let's not get crazy. As my D.P. used to say to my sound guys, "HEARD any good movies lately?"

A shitty looking movie with great sound isn't going to be any better than a beautiful movie with bad sound--they're both duds, in different ways.

Actually, most people blame the cinematographer for bad sound. A bad-sounding picture just doesn't "look good" to them.

The worst part of it is that bad sound makes otherwise good performances seem awful.

But yeah, pretty much all movies actually released have the minimum acceptable level of sound-quality reached. All those $10K films that get released have $100K worth of sound done to them in post.

They just go out with really shitty audio. *

*okay, it's not HORRIBLE, but the mixing is pretty mediocre, since I've done all that horseshit myself. Who can afford an actual post mixer?