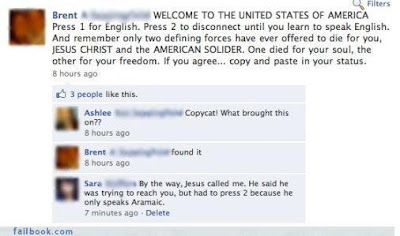 It occurs to me that perhaps the out-of-focus shots I've been seeing during my 30 Rock marathon are the result of the editor choosing takes based on acting rather than technical merit. In other words, they did indeed shoot the shot again with better focus, but the out-of-focus shot had a better or more appropriate performance so they figured that was better than the in-focus shot.

It's really hard to get that kind of handheld work in focus. And I understand from someone who's worked on the show that they take a looooooong time shooting it and go to a lot of trouble to get the technical aspects right. That would drive me nuts. I could never do comedy, it's just so-not-fun on set.
__
I think I should learn the guitar to Zeppelin's Moby Dick and the guitar solo to Pink Floyd's Comfortably Numb. Those would be two very different things stylistically which are very outside what I normally do. Learning them might be good for me as a guitarist.
__
Whenever I read a scene in a script that has no conflict in it, the whole screenplay just dies for me. Sure, the other thing that's annoying is characters arguing for no reason. But it's vastly better to have characters in a bad argument than no conflict at all.

Horror movies are particularly vulnerable to the no-conflict scenes. Usually it's the scene where the teenagers are in the friggin' car on their way to the remote place where the headcount will be (at a minimum) n-1, where "n" is the number of speaking roles.

And you just know that the filmmakers wanted this scene because it shows how happy and great everything is with the characters before everything goes to pot. But it never ever works. At least have them arguing about what they're wearing or music or something. Sure, it would be better if they were arguing about stuff that had to do with their characters and what they were going to need dramatically later when n=.5 but I'll take anything at this point.
__
*The result of blogging after having a drink.
at 6/11/2010 11:49:00 PM