The Last Thing You Need

You're flat on your back, staring up at some star you've never seen before. Your suit has you swimming in a bluelove haze of gentle flowers which can only mean you've been hit real bad and one of the little computer brains in your armor decided to give you the best stuff it had.
It turns out that it was a processor by your right knee. It talked to the chips in your brain, gave them a "handshake" and filled your nervous system with fun-time.
There's a gurgling sound far away. That's the suit filling your lungs with air or, if you don't have enough lungs to aerate your blood the suit will make sure your brain gets enough O2 directly. Hell, you don't even have that much organic brain to contend with anyway.
Jimmy's sloughing over this planet with tanks, he doesn't like the armor we wear he wants to stay inside where it's warm and cozy. You have rudimentary readouts on your HUD. You can see the Skinny's tanks roll over the barren and barely Terraformed plateau as little red triangles. They seem to be ignoring you.
Suddenly one of his tanks disappears. Then another.
You're stoned out of your gourd at this point wondering how much of your body you really have left. You certainly don't have any of your mind left.
And the triangles on your heads-up-display keep blinking out.
Fighter-bombers. Terran. They're picking off the tanks which had cut your unit in half within 30 seconds of landing on this Plateau.
A robotic landing craft rides right on top of you. You see the enormous blood-red crescent on the intake door as they open and a probe comes down and attaches itself to a port on your helmet that is, for whatever reason, still exporting data. More probes and robotic arms descend -- cracking open your helmet and you take your first breath of air from this planet and it tastes like latrine mixed with diesel fuel and rotting fish but without what we might call the "pleasant" part of those smells. 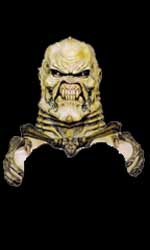 You're nodding out though and a foam is being sprayed on you -- flesh healant and blood clotter. Your last thought before you black out is that some idiot AI from Mission is going to give you a promotion again now that you're more robot than human. That's the last thing you need.
at 2/19/2012 12:10:00 AM