I do a thing here on this blog which otherwise drives me nuts in real life. See, I put this amusing picture here and it has nothing to do with the rest of this post. 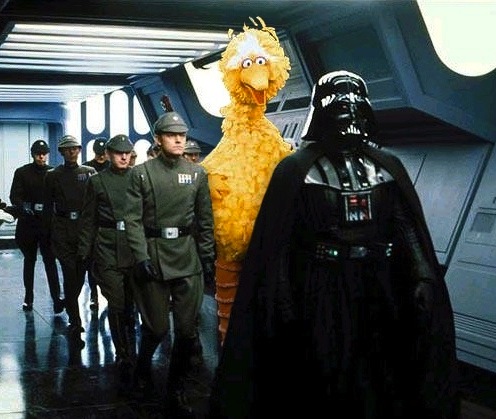 But the point of the amusing picture is simply that it amuses me. It doesn't in turn make the rest of the post a joke.
Likewise I have a "no jokes" rule in brainstorming. If you're just going to make a joke, you're wasting everyone's time. I'd rather you came up with a bad idea than an idea that's deliberately bad.
But being as this is my blog, I can deface it in any way my little brain sees fit. Or any way that I happen to have images sitting on my desktop which haven't been uploaded yet.
OK, now that I've got that off my chest, here is the basic breakdown for the 8-day shoot that will be The Prometheus Trap.

1. Venom bridge (small cockpit from Jason)/Venom corridor (this is a gratuitous set, it'll be scheduled on the same day as the Venom Bridge, maybe it'll be the tube?)
2. Venom Cyro-Compartment/Venom Locker Room (this is actually the same set and will be the locker room at SRS).
3. Cargo bay (the shop -- must be filled with haze and be dark outside)
4. Prometheus airlock (we have to build this set with a door openable by oxyaceteline torch)/Promethius corridors (built corridors)
5. Prometheus Cryo-Compartment (built set)
6. Observation Deck (built set)
7. Bridge (Jason's bridge)
8. Engineering (I have no idea)
at 2/20/2012 10:04:00 PM