The Stars My Dispatches

So I'm reading two books right now. Dispatches by Michael Herr and The Stars My Destination  by Alfred Bester.

Vorga-T: 1339 Crew by InfinitudeTortoises
Shop for a different t-shirt design
Here's a friendly tip: don't read Dispatches unless you're heavily medicated. It's a fascinating book, but it'll royally piss you off. Herr's writing style became essentially the voice we think of in our heads of the American experience in the Vietnam War. He did, after all, co-write the screenplays of both Apocalypse Now as well as Full Metal Jacket.
His deconstruction of the sheer amount of bullshit shoveled on the American public by the Army, the Marines, General Westmoreland, and the whole gang of idiots running that show is just astounding.
Like science-fiction + madness levels of astounding. The book is bad for your blood pressure.
The writing style is somewhat trippy and in the "you are here" poetry of the "new journalism" of the time. But honestly, what he's saying is so crazy you can't write about it without talking about the metaphor of a snake which winds from Washington DC through Saigon to I Corps. The whole war was just nuts. Off the wall head banging screaming in the middle of the night nuts.
And if you want to read about it, read Dispatches. 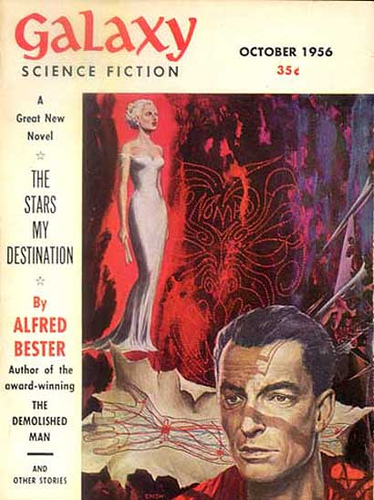 There's a Marine named "Day Tripper". That's such an awesome name we have to use it somewhere.

Now, this The Stars, My Destination is a shockingly modern-seeming book. And it cooks along at quite a clip too. It's also about madness, but lucky for us it's just one dude's madness and it's a long time from now.
at 2/20/2012 01:39:00 AM

Dispatches is one of the greatest books I ever read. Just an amazing telling of the experience of journalists under fire and the unique challenges of Viet Nam, the first helicopter war.