Let's make some assumptions. Because, you know, assumptions are fun. Let's pretend that the nut of the 177 MacDougal Street space is $20,000 a month.
And let's pretend there's 2000 square feet of space.
Both of these numbers are imprecise, but somewhat accurate.
If we were to have each square foot "pull its weight" in revenue per month, it would have to bring in $10 a month in revenue.
Of course this is absurd. Bathrooms, for instance, are not revenue - generating. They're at best a loss leader. But you don't want to get rid of them because they don't bring in money. Trust me on that one. 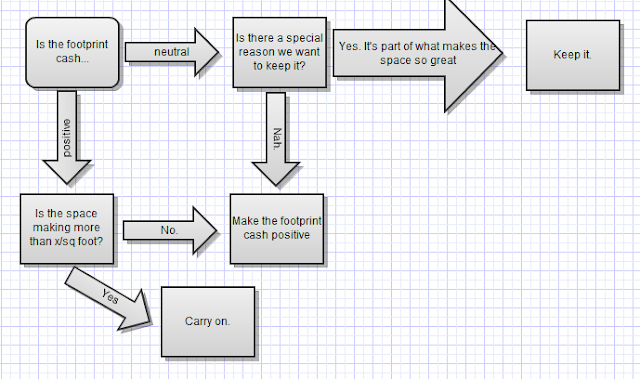 So when looking at the different parts of the space, think about what is good or bad about each part. And figure out how much the place is worth per square foot. You'll notice there's an "x" in there. I don't know what that number is.
Obviously the amount of money the theater itself makes per square foot is greater than the windowbox. But maybe the windowbox is so nice we want to keep it just because. Is the bookstore worth keeping as a bookstore? Would it make more money if we put offices for resident theater companies in the same space and charged them per month to be there? What about the Cafe? Does it make sense to make the cafe and the box office the same space and use the box office space as cubicles for resident theaters?
I don't know the answers. But it'll be interesting to run the numbers.
at 11/20/2011 07:12:00 PM