So the 2011 Innovative Theater Awards Stage Manager of the Year made an emotional and impassioned speech about how she felt duped by the Board and the managers of Theatresource and then left the "town hall" meeting the Board had called at 8pm on a Saturday night because she, unlike anyone on the Board, actually does theater and had to make her call.
As the Stage Manager was standing outside the theater pulling herself together, Jennifer Thatcher breezed by and  dripping with sarcasm and as snotty a tone possible said "It's too bad you can't stay." 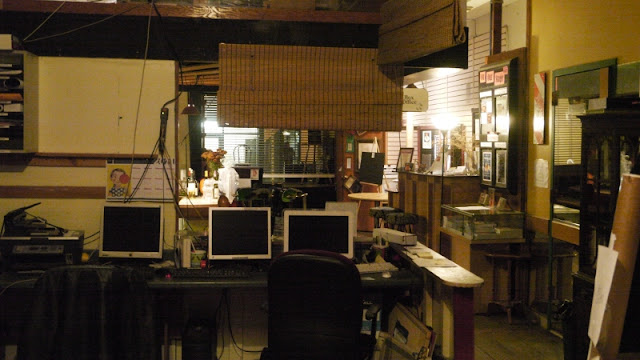 Yeah, "too bad".
So that's basically where we're at.
+++++
In addition to being a nasty piece of work, we also discovered that Jennifer Thatcher is spectacularly incompetent. Apparently the reason Theatresource is closing is because she ran cash flow projections for the very first time.
The irony is that she still doesn't understand what the "nut" is for running Theatresource. And she's the Managing Director(!).
A couple years ago when there was the first and only a meeting of the Advisory Board she was asked what the nut was because each year Theatresource was "surprised" by the tax bill that came in at the end of the year.
So she gave them a number. "And does that include the taxes?" asked a member of the Advisory Board who can, you know, read a balance sheet. Jen Thatcher: "Uh, no."
And still she thinks the nut to be (ironically) lower than it actually is. All you have to do is look at the YTD and see that contrary to what Thatcher said in the meeting, the nut is about $20,000 a month, not $15,000 a month.
And we can't make that nut with rentals and ticket sales. Never could. It's unlikely we ever will. Nobody has a model which shows you can make the nut with rentals and ticket sales. Nobody ever has.
We have to make the nut by grants and donations and fundraising and all the other things the Board has simply not done.
+++++
The other issue which is frequently cited as the reason Theatresouce is closing is that the rent is going up. Paraphrasing Thatcher at the town hall "When we first moved in here the rent was $6000 a month, now it's $9700 a month".
Yes -- after 12 years the rent has been going up. This board signed the lease. They know this. Everybody knows this. Rent goes up. So, incidentally, does what we charge people to rent the theater.
I used to have respect for the people on this Board. And at least they all decided to show up, with the exception of the President of the Board, Courtney Birnbaum, who couldn't be bothered to attend. But they seriously, at a fundamental level, cannot read their own balance sheets.
Why on earth this isn't published on the Web is anyone's guess. But here's the YTD of the 501(c)3 for your dining and dancing pleasure.
at 11/19/2011 10:23:00 PM