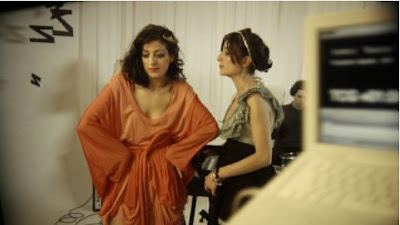 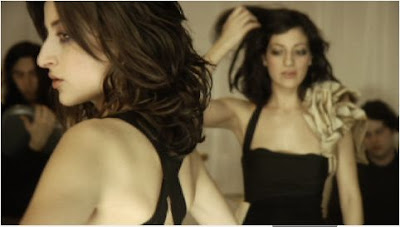 You know what's frustrating about "independent film"? It's how dang conservative it is. The irony is that some big-budget major releases** are really quite radical look-wise. Off the top of my head I'm thinking: Eternal Sunshine of the Spotless Mind or American Beauty or for that matter, 300 and Sin City.
What's odd about this is that it's actually easier to shoot something which looks like 300 than it is to shoot the average boring two-people-talking-in-a-room movie. But the indies just won't do it. I remember watching that picture and thinking "Wow, people will put up with any look."
(Sound, on the other hand, is not to be messed with. We have a very specific way we want to hear dialog -- close, clear, and in sync*** -- that's the only way.)
So I'm going to start making more whack images. Yup. That's what I'm gonna do. And make a comic book movie. Yeah.
*************
I just read a screenplay last night which was on InkTip. It's a good screenplay. While reading it I thought -- hmm -- how does this stack up against Save the Cat? So I loaded up the BS2 beat calculater (which is linked in a previous post) and sure enough -- the beats all lined up within one page. Yup.
*************
I want to direct a remake of Total Recall. If I can't direct the remake of it, can we at least do the mockbuster of it?
*************
The image size of a 35mm motion picture negative is 18x24mm.
Ken Rockwell's D90 review.
Squirrel Underpants.
*************
*Yup, makin' a music video and using the playback of timecode on a laptop as a timecode slate. Now THAT'S the way to do it! Sure, I could have lent them a timecode slate but this is so much freakin cooler!
**"Hollywood" doesn't really mean anything and it usually irks me when people complain about it. If you mean the 6 major studios (and there have be 6 practically since the movie biz began, no matter how they gobble one another up or split apart, it keeps equalling 6) then just say the "Big 6". Otherwise, whenever an argument is made which involves "Hollywood" as a bogeyman, they end up throwing some small studios (even the size of Pandora Machine) in with the Big 6 just to make the point.
***Don't talk to me about parts of my movies which are out of sync. I know about it. I don't want to hear about it. There are times when it can be incredibly difficult.
at 2/27/2009 11:55:00 AM

Email ThisBlogThis!Share to TwitterShare to FacebookShare to Pinterest
Labels: D90, Moviemaking in General