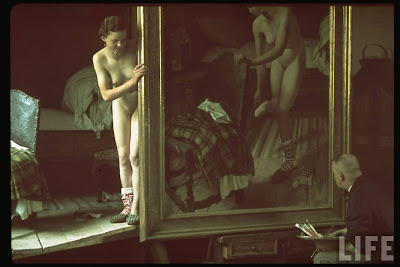 There is no such color as magenta.


Hooray! Here is more text! There is no more part of this blog post which you want to read. (Boy, I could use an editor to edit sentences like that.)

Valentine and Lawson 28
break into 3 p70


We can see through her eyes that a RED bar is raising dangerously high. High enough to HURT her Bio-Sensors.
She throws her head back in PAIN.
Then she looks at Sutton, like a robot possessed. The objects in the room start to shake, some start to burst and pop, Sutton takes a step back.
What the fuck? Look on Sutton’s face.
He grabs his head. OIL flows from his nose and then with the force of an ANDROID she punches him right through, her fist coming out with his metal spine on her hand.
He falls back. Then...
She calms down, everything stops shaking.
FROM HER POV
We see...
WEAPONIZATION ACHIEVED, LOCAL TARGET, and then the words disappear and she RESETS.
Helen looks around. She is lost. She looks at the bodies in front of her. The HUMAN and the ANDROID.
She looks at Sutton’s leather coat, his weapons, She undresses him.
She grabs them, and let’s HYWEL’S MILITARY jacket fall from her body. She starts to dress. When she notices Mach and goes to him.
HELEN
How can I help you?
Mach says nothing.
HELEN (cont’d)
You have stopped functioning. Again.
She grabs him, he leans back, quite dead. She lets him fall back onto the floor.
HELEN (cont’d)
You must restart.
She sits against the wall, next to him.
HELEN (cont’d)
Execute restart.
Nothing. She seems quite innocently lost. She grabs the DOG TAG from around his neck. It has a religious SYMBOL on it.
HELEN (cont'd)
Your religion.
She examines the symbol.
HELEN (cont’d)
I will grieve, as per your manifests instructions.
at 2/16/2009 09:15:00 PM