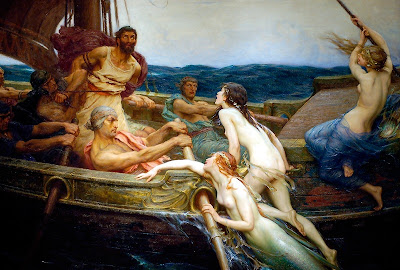 I'm writing music for Mac Rogers' Universal Robots. Some of the music comes from the Woyzeck I composed a few years ago.

The director of this show, however, absolutely unequivocally and comically will not answer any of my emails. I've sent her about 40 cues* of different styles, different kinds of music, different centuries. Then I harass the producers to get her to get back to me. Whee!

But now we're in the last lap of rehearsals before we gotta tech this bad boy. So instead (now that I've seen a run though, which for the sound design is not substantially different from the previous run in the theater) I'm just making some decisions and going with it. There won't be any turning back.

Up next: "Difficult Listening Hour". That's the underscore for a play-within-the-play(within-the-play). 12 tones. No waiting. It's un-listenable on its own but might amuse during the recreations of Praha avant-theatre of the early 20's.

Looking at these different previews of Alien Uprising reminds me that people are frequently not very good at analyzing art. Especially movies. For instance: sound and music are the big secret killers of drama yet typically nobody notices the sound -- and they blame other things like the lighting. That usually works in my favor when I'm just doing sound.

When I read the above articles the first thing which pops into my mind is "Dear Lord, how incredibly unsophisticated." I mean, how old do you have to be to realize that you can't tell anything about the story in a movie from the trailer? 12? But of course, the important thing for those websites is click-throughs so they're concerned primarily with a provocative enough headline which gets someone to click on it. So you can't really blame them.

But the other thing is how story gets confused with tone. What I always found interesting about Alien Uprising is that Josh James' script was structurally similar to Aliens but the characters are all different, specific, and unique. Some of them might have analogs in some of the Alien movies -- by "analog" I mean "Oh look he plays the civilian bad-guy." But the important thing is that it's Aliens meets Assault on Precinct 13. Both of those stories are familiar, but not together. And it's why you want to watch the movie through to the end.**

Clearly we should make our own Mutant Chronicles.

Email ThisBlogThis!Share to TwitterShare to FacebookShare to Pinterest
Labels: 0802, Theater