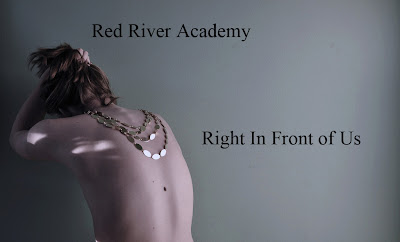 Man, I have been overblogging lately. If only I could get started shooting a movie, I wouldn't be overblogging.
To make your band's album cover, do the following:

1 - To get the name of your band, go to Wikipedia and hit “random” or click here

. The first random Wikipedia article you get is the name of your band.

2 - To get your album title, go to Quotations Page and select "random quotations" or click here

. The last four or five words of the very last quote on the page is the title of your album.

. The third picture, no matter what it is, will be your album cover.

4. Use Photoshop or something similar to put it together.
Tell me that's not how they're doing it already. "Merriweather Post Pavillion"? Please, give it a rest. (This coming from someone who had/has a band named "Prague Spring" which released an album called "Pleasure for the Empire". But at least I had the guts to actually use a random band-name generator for my album title.)
The picture is from.
Red River Academy.
*************
Pay no attention to Queen of Mars notes below:
The two lead characters should have their motivations swapped. She should be gung ho and he should be reticent.
The different characters should all have unique voices. It might work if she had a really dirty mouth but used archaic terms for everything.
Can the cat be a hologram of a cat?
at 2/28/2009 06:15:00 PM

Email ThisBlogThis!Share to TwitterShare to FacebookShare to Pinterest
Labels: music

I would have said "reluctant" instead of "reticent." But recent usage tends to accept both in your sentence.

I would have said "tphththhhhthth!" But recent usage tends to accept "Aggelwalla wooloo blablabla."