Notes on a script 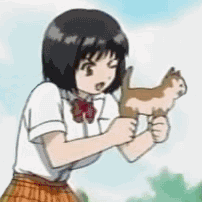 I was wondering what to do about Helen walking around and her nethers. Perhaps when she gets her gun she also takes a gun-belt and thigh holster. Possibly that could work in such a way that it just makes her topless for the rest of the pages? She is naked, from what I can tell, for about 44 pages...

I want her to kill her some robo biotches earlier. Can she kill the guy(s) who come into the barracks?

Nice saving the cat there with Nathan. I was thinking that perhaps he can recognize she's a 'droid and they fight, she cripples him and decides not to kill him. I realize that means she has to not weaponize every time she fights.

We need to establish that the people taking over the station are androids early on. Maybe someone just says "Androids!"

Rather than "environmentals" maybe we just just say "the air compressors are off". That's why the station is quiet (too quiet). I know, I know, that makes an issue with the air shaft. Perhaps the androids kill the O2 to the whole facility except to the hostage room. Oh wait, does the air shaft thing really do anything ultimately with the plot? It's just a way to move people around, isn't it? That could be done by anything -- just automatically closing off sections of the station for instance.

Dude, the pejorative term androids use for humans -- "breather" -- is fantastic! And "shells" for androids!

My first thought is that she shouldn't be convinced by Hywel's lie about her so easily. I feel she should know she's a robot, or at least have an idea. She should maybe be a bit Hamletian about whom to kill and why. It would be nice if she saw humans treating robots badly too -- then she could have a real dilemma about which side to be on.

Remember, the idea is that a combat android wakes up on a space station that's under attack and doesn't know which side she's on! ;-)

More flashbacks in the 60 pages region.

I feel that activating Creation should be more of a Messianic mission for Tybalt. It's not so much that it'll make the androids "human" as it will serve Justice and bring the androids their Messiah. Perhaps Tybalt promises "freedom" rather than "humanity" with Creation. I know. What the androids in Blade Runner were looking for was immortality. Perhaps there's planned obsolescence with the androids and they burn out relatively young. Creation will make them immortal. What do you think?

How does the Weapon work? I thought there was a hint when there was only one vial of nanobots for Nathan. Perhaps the Hell End models are bio/nano-weapons because they can create the nanobots which replicate and destroy living things and machines. Is the Weapon also Creation? Is it simply Helen 2? Or does it take both Helens to make Creation?

Helen 2 should probably waste a couple androids when she first wakes up.

I think Helen 1 should be contemplating mass suicide/homicide with her weapon instead of stabbing herself in the tum.

why does this sound familiar?

sexy Androids, that love to walk around naked, and rape humans!!!