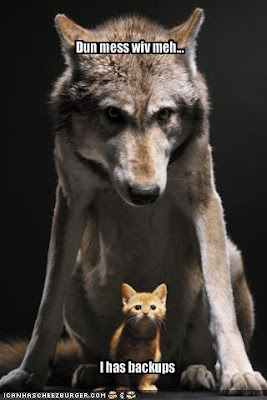 Sleeper might become a movie. Tom might be writing the mockbuster to it without even knowing it.

Has anyone else noticed how buggy Final Draft is? If you delete a section of a script it arbitrarily jumps to another page so you have to manually scroll back to where you were.

Don't bother reading the text below. It's pretty boring. It's just me trying to work out some story points. Do yourself a favor and just look at the cute kitty.

So. Helen finally finds Doctor Hywel and can't kill him. She doesn't know why she should kill him. She escapes to the air ducts and is shot by Valmont. She gets away from Valmont but is then hunted by the drone.

Then Tybalt realizes that 1. Hywel can't be killed and 2. Hywel is willing to help -- they only need Helen to open the Core.

The drone beats the crap out of Helen. Helen figures her only chance is to get the Genesis (the necklace suggests that?) so she opens the Core.

But the Genesis is a completely alien robot. All it wants to do is protect Hywel. Hywel is the last of his alien species.

Mach kills Hywel (because Mach is human, he can).

So the Genesis goes nuts and goes hunting for Helen to "fix" her. Then it's going to "fix" all the other androids.

Tybalt reprograms the drone to fight the Genesis.

Hywel waits until the robots kill (what he thinks is the) last human on the station. Then he reveals himself. Then he's going to open the Core, and get all of them to attack the remaining three stations