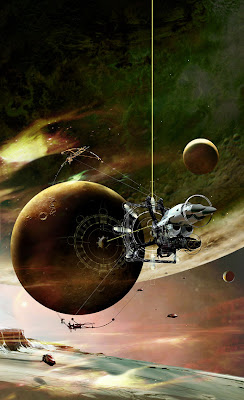 All of last year we'd been struggling to get enough scripts to be able to shoot 2 to 3 science-fiction features with strong female leads a year.

And in December we got news from this year's AFM (the American Film Market in November which depressed the whole blogonets) that things, they are a-changing and sales are depressed but that the one thing buyers still like are "end of the world" pictures.

So we gotta do one of those.

I noticed that The Asylum has two pictures with "2012" in the freakin' title. They also have things like "Megafault" and such.

So like I said, we gotta do one of those. And we have to have it "in the can" by Cannes. (Wow. No. I'm not going any further with that.)

Unfortunately, we don't have a script. Fortunately, I have a beat sheet for one. And the first, er, 15 or so pages. So far it's holding up but we really have to have this screenplay done by, um, two weeks ago.

You know what the most popular page on this blog is? Three Mechs. I have no idea why. Well, no. Apparently people search for "mechs".

I finished Nancy Kress' Probability Moon. A good story, a good idea, I felt the "hard science" part of it was a tad gratuitous. But I read books like I read scripts nowadays ("We don't need this, we don't need that, this part can be simplified, we can put those two characters together..." etc.) Hey, and why, if there's a "shared reality" is there a class distinction in the society? Furthermore, cultural anthropologists would be aware that there is biological precedent for intra-cultural cooperation as well as inter-cultural competition.

Do I want a digital delay pedal? Or in my fantasy world does the house sound take care of all that? One advantage of the pedal is that we don't have to worry about drums or stage wash to get in the sound.
at 1/01/2010 07:00:00 AM

As a trio (yes?) you want a looping delay pedal that you can trigger with a tap of the toe. They take a bit of figuring out and getting used to but they open realms of sound sculpting and some wild effects. Plus trusting front of house to be on your side with delay is risky at best. After all, nothing helps your show more than a tech who misses or ignores a cue or better yet just hits an arbitrary echo without concerning him/herself with matching the beat or tempo. With the newer pedals you can tap your tempo in as you set up the tune and stay in sync with the band and the music. Plus... new toys!

In the fantasy world which I live in, the front-of-house (or monitor engineer) would be as rehearsed as we are. So everything would be cued (as in theater).

But the fact is I'm not really planning specifically to play live and so maybe we just need a delay so we can hear with delay when we rehearse.

What I desperately need is a Lehle 1 @ 3 switcher so that I can go from rhythm to lead guitar.

And we have to add a keyboard player very soon.