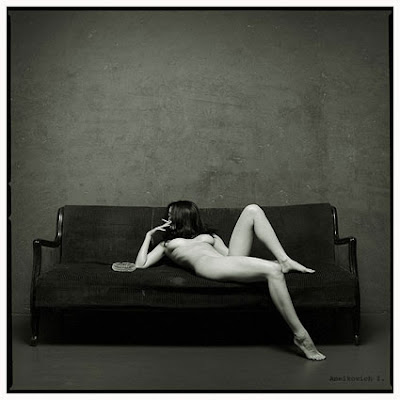 Also, in other news:

I have a feature screenplay which is 73 pages long. That's much too short. But I know that once the re-write happens at least 10 more pages will come into it.

It totally looks like a screenplay I would write. It's way too complicated because the scenario which plays out at the end requires a kind of logic which takes the whole damn movie to explain. And I think we change point of view at the end. Heck, I know we do. We just never realized who our Horatio was.

But there's giant robot mayhem. And some fun characters who do either evil or heroic things. Sometimes both.

I can't find the correct link to credit this picture, it's from a naked-girls-smoking site of some kind (which I suppose you'd expect). Somehow it came through The World's Best Ever.
at 1/15/2010 05:16:00 PM