This is a cheap LED light-ring

and I'm thinking that for $58 you can't do that badly. Mitchell send me a link to it. If you're shooting stuff for EBay, etc., it would seem like a pretty good deal to have one.

You're stuck shooting closeups of whatever you're shooting, but you should be able to actually get them well, and softly, lit.

Remember kids, FAT 32 has a 4GB file-size limit. Lucky for us the screener output from Final Cut of Clonehunter is only 3.6GB. That's a 1280x720 h264 file with two audio tracks. The 4-channel DVCPRO version is 31GB.

But that's not what's important right now. What's important is that I got the second-to-last Malekko Echo 600 "dark" analog delay pedal. If this pedal were sold in the 80's everyone would be all like "Oh man, that sounds terrible, I'll never play New Year's Day on it." But older and wiser, we, now know that the way the echo gradually distorts and turns to mush is AWESOME.

The pedal is also remarkably quiet.

I never did get an answer from Malekko as to what the difference is between the old "Dark" pedal and their new 616 is. Oh, and the LED on it (which is, unfortunately, un-photograph-able) is super groovy. 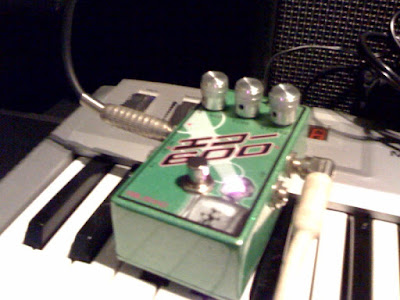 Email ThisBlogThis!Share to TwitterShare to FacebookShare to Pinterest
Labels: 0904, guitar