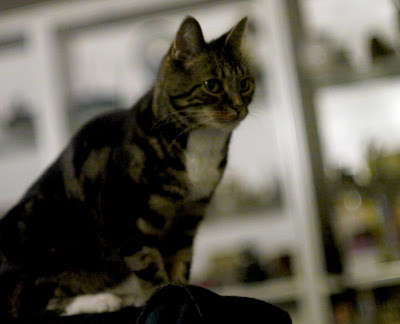 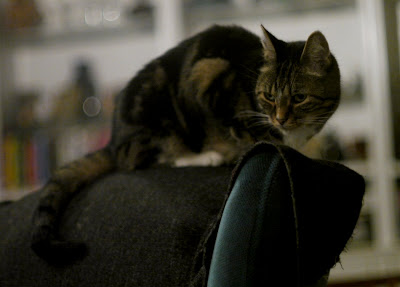 This gig bag from Sadowsky's Guitars looks pretty cool. But I'm afraid it doesn't have shoulder straps -- and that's a deal-killer.

I have a list of script notes to apply to the Day 2 screenplay. I should have gotten on them today. But instead I went to the vet with a sick little Maydl. The vet spelled her name "Meydl". Oy vey. Anyway, she has pinkeye and an upper respiratory infection and, egads, fleas. So we got drugs for Maydl, and flea medicine (for both cats).

We put a notice on Actor's Access for a couple roles in Day 2. We're starting to get the pile o' submissions one gets for that. Remember, we're non-SAG, no pay. Some nudity.

I'm convinced that the GH-1 can take adequate still photographs. But I'll be damned if I really have a handle on how. Or at least how consistently. I keep setting it sort of randomly and sometimes it works out. These pictures are with my Canon S.S.C. 50mm f1.4 lens. To a still photographer that's the equivalent of a 100mm, but in my world (motion picture) that's the equivalent of an 80mm lens. At least, that's what I understand. Just look at the pretty bokeh blur of objects in the background.

There's also the InCase Slimbag for electric guitars. It's made to hold your laptop too, which I find amusing. I can't quite see how the pocket under the neck works, it seems like it might be kinda large, which is also cool.

And of course the $170 Reunion Blues Continental.

Phooey. The gamma between Photoshop (where I brightened up the midrange and sank the blacks in these two pictures) and Windows is just way off. Meh. That's just annoying. I'm going to upgrade our dual-quad-core Mac to Snow Leopard just because it supposedly fixes the gamma randomness from application to application.