Amusing Coincidence of the Day 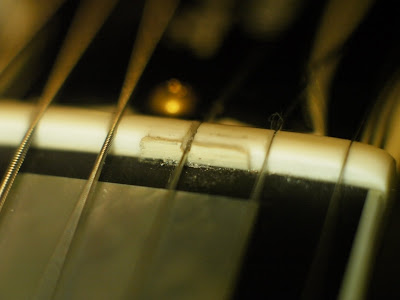 And it just so happens to be guitar Friday too.

So I'm at 30th Street Guitars to pick up my rare and unusual "oxblood" Les Paul and I'm standing there with another fellow and we can see Matt and one of the sales guys looking at us, pointing, and then looking back at the sales tickets in their hands, and then back at us. I mean, there was much confusion.

Because two guys named "Andrew" were picking up their oxblood Les Pauls. In New York City. On the same day. At the same time. From the same shop. Now it's true we both have most excellent names. And simply amazing taste in guitars. So you might mix us up. He's the tall, good-looking Asian dude. If you still have trouble telling us apart: his oxblood red Les Paul has a big red "kill" switch on it. Mine doesn't.

What mine does have, though, is something I can't seem to take a photograph of. Well, I can't take a flattering picture of it certainly. It's just a bit of extra bone on the G string to make the A (2nd fret) on that same string actually sound in tune which is, shockingly, something which few guitars do. And now that guitar RAWKS. I sounds great. It plays buttery. Hooray for me.

I was in such a good mood I blew an extra $150 on this Reunion Blues case. So far I only have one complaint -- the shoulder straps are a bit high for going through the subway with. I have to take the guitar off my back to go through turnstiles or even to get on the train. Maybe when I loosen them up it'll be better. 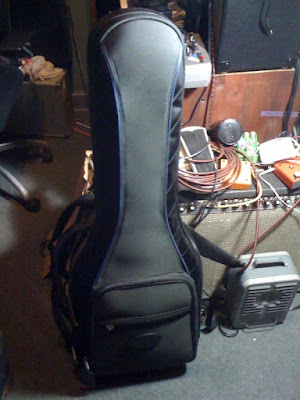 Every guitar needs a kill switch!

Les Pauls sort of inherently do have a kill switch -- but you can only use one pickup with it. If you turn one of the volume pots all the way down (say the neck volume) and switch from the bridge to the middle position on the pickup selector, it'll effectively kill the output.

But it's not a big intermittent kill switch like Andrew II has.