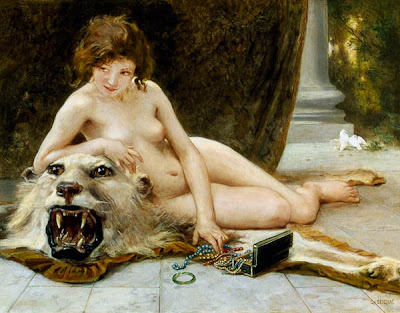 This dude, Guillaume Seignac, is awesome. How he manages to combine the lurid and the sublime is simply beyond me. But. He. Is. Awesome. Heck, I can't even pronounce his name and he's still awesome.

I mean, you can look at everything else, everything, but then... check out the doves frolicking in the background.

And dig the infinite depth-of-field. I so wish I could shoot that way. But buyers even know that 35mm film has a relatively shallow depth of field at any given f-stop and it's just not a popular look right now.

Yep, no Citizen Kane for us. So we tend to go shallow instead of deep. But all them post-pre-Raphaelites (they actually have a name but I totally forget what it is) have such fun stuff in the deep background. The shallow depth of field is, as far as I can think right now, our only concession to commercial prospects for motion pictures -- where I'm deliberately doing something which I artistically don't agree with all the time.
at 2/27/2010 11:58:00 PM