The Only Filmmaking Advice You Need 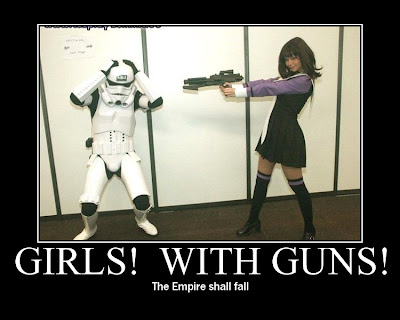 Via Bill C, the brilliant only filmmaking advice you'll ever need. I though I'd add my own noise to the discussion. I figure some of the points could be amplified.

1. Shoot the damn thing. Yes. And furthermore quit your whining about it. Firstly, of the, what, 1000(?) shots it takes to make a movie there will be some that aren't quite as well exposed as the others. Someone won't be exactly in the right place. It'll be grainy or not have pretty back-lighting. Hell, some will be a bit out-of-focus. And your audience will not care about any of that. What they will care about is you not having the coverage you need. So get those cutaways even if they don't look like someone spent 12 hours lighting it. Just shoot. And stop taking more than 20 minutes to light stuff.

2. Three takes and go. We actually have a more complicated formula for that. It's a formula where the actors almost never get more than one closeup. But it works well for everyone.:
A. Shoot all the action: get all the entrances and exits. Somebody draws a gun? Get a good shot of the gun draw. Somebody pours a drink? Get that too. Shoot all the Action.
B. Get all the dialog : get everything everyone says in either a medium or c/u. This will help the sound department too. Also, get some reactions. I don't care if you think you're going to get this scene all in one shot that would make Robert Altman proud. You don't have the sound department he did. Shoot all the dialog.
C. Get a shot of anything anyone refers to: if there's a body on the floor and one of the characters points (even metaphorically) at it and says "What about this?" make sure you get a shot of the body. If they refer to something on the wall, get a shot of the thing on the wall. Just squeeze off a few frames MOS if you must. But get a shot of anything anyone refers to.
D. Get a shot of anyone making a decision. Heck, think of all the places in a scene where someone could be making a decision and make sure you've got that. Shoot the Decisions.
E. Light once, shoot many. Light in such a way that you can turn around and grab whatever you need without relighting. We frequently bring a light in closer on closeups, but that's it. Don't relight. Learn how to light for the whole scene (or at least half the scene and then have the other half of the scene pre-lit but with the lamps off).
F. Keep shooting. If you end up doing one take per actor (which we frequently do) there is a big advantage -- we don't stop shooting. This actually makes it easier on the actors because even though we don't spend a lot of time doing their closeups, we do spend more time actually doing the scene so they don't get lost or have to remember where the heck they were emotionally to do the scene. We just go again. Right away. Remember rule E? Yeah that. Just move the camera over there and go again. Everyone will have fun that way. And you'll get the movie shot.

3. Get coverage first, then do the fancy stuff. I try do do any sort of crazy shot first thing in the day because I can get it set up before the actors are in costume and such. But if it doesn't work I *quit* trying to do it. Also, those shots are usually MOS. But the real deal about them is that you probably only need a few seconds of the fancy shot when you get to the final edit. So if you get a little bit of it working and then the shot suddenly gets blown, don't worry so much about it. Get all the action, get all the dialog, get everything anyone refers to, get any decisions that are made. Those are the important things. Then get lunch. Then do it again for the next scene. Then go home and get enough sleep.

4. Get good sound or learn ADR. 'Nuff said. This isn't a subject I think about too much because I started out my life in audio, then audio-for-theater, then audio-for-broadcast, then audio-for-picture. So it's a bit easier for me. Find an aggressive boom operator. If they aren't arguing with the camera operator then find one who will. ;-)

5. Learn to edit. I'd move this to #1. If you don't understand editing then you're not making a movie. You're shooting some crap which later on someone will make into a movie. I remember shooting a fight scene once and I wanted to get this one particular angle and action and the fight choreographer and the actor (both of whom weren't editors) kept arguing with me about it because it didn't match the literal continuity of the fight. The gaffer, the producer, and the sound guy (who were editors -- yeah, that's how we roll, baby) were all like "yeah, that'll work". And, of course, it did. (Perhaps I should create the rule "Stop arguing with Drew" oh wait, no, I already have that rule).
Here's kind of a sub-rule to all that. If there's some doubt about which way the freakin' beer bottles were arranged in the shot -- just shoot the freakin' thing twice. I assure you that you've spent more time discussing it than it would take to shoot the guy walking in again. Oh, but in either case the shot either 1. will not be used or 2. nobody will notice or care anyway.

6. Finish the film. You are going to learn a WHOLE LOT about filmmaking when you suddenly have to make DM&E's. It's going to change your life. Not always in the good way. But it WILL make your next picture easier.

7. Nail one aspect. 8. Nail one scene. These are interesting ideas. I seem to find them after we make the picture. We tend to do a "What did we learn this time?" as a post-mortem on the picture. We try to learn something on every movie we make. We try to make each movie better than the last. Sometimes we do.

9. Make a badass trailer. Now for me that means: don't make the trailer yourself! Get someone who knows how to make trailers that sell a movie to make your trailer. Maybe one day I'll be able to cut a trailer for a picture I directed. But today is not that day. Tomorrow's not looking too good either. Every time a professional has cut a trailer for us we've been able to say "That's so much better than what we would have cut, and we would have never gone in that direction ourselves." The trailer is a marketing and sales tool. As the "artist" you should just go away while they make it for you. Unless you're Chance Shirley.
at 2/01/2010 11:54:00 AM

The good Hide trailer (version"Bloodjet") was actually cut by Adam Wingard, a director friend of mine. I thought he found the "heart" of the movie in a way I would not have.

Speaking of, I need to cut an Interplanetary trailer that doesn't feature copyrighted music...

Don't you live in the land of awesome indy bands who would love to have you use their music in your trailer? ;-)

This is Matt (from Cinema Advanced). I just found your link to my article and decided to check out what you had to say.

I must say great analysis and expansion on what I said. I especially like the way you broke down number 2 into strategic parts. I think you've essentially written the perfect formula for low budget production.

For number 3...technically you're right that its a good idea to try and knock out the fancy stuff... but that's only because you have the discipline to quit if it doesn't work out. Not everyone has that kind of discipline.

I literally laughed out loud for number 4 where you said if the boom op and camera person aren't arguing then get a boom op who will. I just boom op'd on a feature, and I probably got in an argument with the camera op literally everyday. I normally do camera myself and I couldn't comprehend why he couldn't sacrifice his shot just a little so I could boom. Essentially, he would have only been happy if we had lav'd the whole shoot. Being an audio guy, I'm sure you know how well that works.

For number 5. You're right. It should be number 1. As a matter of fact, I plan on doing sort of a companion article on this one day, and learning how to edit will be number one.

For number 9... It never occurred to me to suggest someone else do it. I guess I consider myself a good trailer editor (I'm probably wrong). So I never thought to farm that job out.

Anyways, great post. I'm going to poke around your blog a bit more to see what other fun stuff you have.

Ha! Yeah, if I edited our trailers I'd NEVER get distribution. ;-)
Of course, I don't even edit the finished feature anymore either.