The Kittens are Under Control 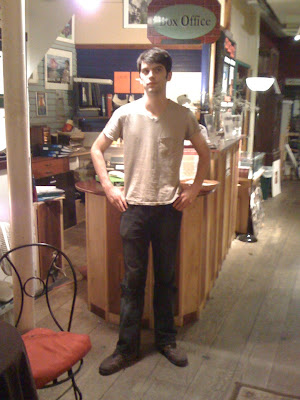 The absurdly good - looking Tom Rowen models his clothes, which just might end up being his costume in Day 2.
*****
From Melissa Riker's Pressing Empty. Dance. DANCE!
*****
From the Digital Gypsy:

If you haven't checked it out in a while, head on over to VFXWages and take a look at some of our Wages. They've been pretty accurate over time. I've included a graph here that shows the overall compositing wages. The red line is the one you want, which stretches from around $20/hr USD for a starting wage, up to a median of about $63.50 for 14-16 years of experience, before heading down to $52/hr for 20+ years experience (this is most likely a drop because those rates could be salaried). Who says that wages couldn't be quantifiable?

Fifty bucks an hour is about $2K a week (plus, presumably, overtime -- although if the positions are "exempt" then maybe not.) That's about $100K a year for 20+ years of experience for a compositor. If you're at $20/hour that's an ostensible $800/week or $40K/year but there's probably lots of overtime if you work for one of the big houses.
*****
Full Moon Direct.
*****
Mouth and MacNeil. Do yourself a favor and don't play this video if you don't want to be happy and stomping around like a muppet all day. Maggie MacNeil is still pretty dishy. Bonus -- they look exactly like you expect them to (this, I think, is the "official video"). Double bonus -- second half is in German!