New Ways to Exploit You! 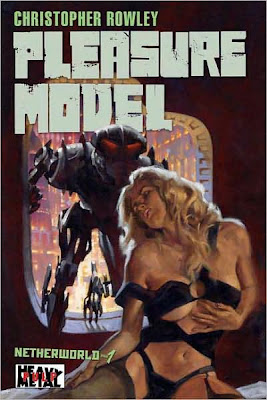 The new and most awesome way to exploit actors? Make them write! Yes! The best dialog changes come from actors. Better than me having to do it, that's for sure.
But we can go even further. We can make them fight directors, second unit directors, and even do fight casting for us. How do I know? I know because that's what I'm doing with/to the raconteur and insoluble (I've dampened him, so I know) David Ian Lee. He's doing all that hard work of fight directing and choreographing and he's showing us his ass! Ooh, that gives me an idea -- we should hold a lottery for who gets to sharpie the "crosses" tattoo on it.
Heck, now that I think of it, most of David's work on the screenplay involved cutting his lines. For an actor that's like he has Stockholm Syndrome.
Later, David's going to have my baby. Again.
*****
Looks like the Tylenol PM has kicked in.
*****
The Clonehunter trailer is the subject of this post on This Quiet Earth. We love our B-sci-fi too. I, of course, had to leave a follow-up comment on the use of eye glasses in the 26th century.
*****
Dude, The Asylum is doing their version of Sinbad. That just makes me so... envious. "Sinbad faces bloodthirsty rocs, giant man-eating cyclops, clothing-challenged sirens..."
*****
Via John Scalzi:
* Pleasure Model: Netherworld Book 1, by Christopher Rowley (Tor): This collaboration between Tor Books andHeavy Metal Magazine seeks to revive the look and feel of pulp novels; at the very least they’ve got the artwork down. Story involves a cop and a genetically-designed sex slave, working a murder case. Yeah, it’s pretty much exactly as you’d expect something from Heavy Metal to be. Out now.
You know what's the sexiest thing about that picture? I got two words for you. Robot. Eyes.
*****
Oh believe me, you don't want to know about amplifier kits. Or, OK, if you do, keep reading.
GDS specializes in 18watt (as in Marshall 18 watt) kits. But they'll make you a JTM45 if you want one.
Allen Amplification makes a variety of kits. Their pre-made amps seem to be along the lines of Fender-type amps.
Mojotone makes a variety of amp kits.
And of course Weber makes them some amp kits. Lots of 'em.
Tube Depot makes kits.
Mission Amps makes the Aurora kit.
Marsh Amps makes a bunch of kits.
Torres makes kits.
Doberman makes kits in conjunction with the AX84 cooperative building project. They have some kits which are beginner-ish.
STF is a kit maker.
Ha! This is the closest to a Vibrolux kit I've found on the interwebs. The Torres Retrolux. Depending on the tubes, it can also be a Deluxe.
Metroamp is what I keep going back to. Maybe for clean tone I want a Deluxe?

Email ThisBlogThis!Share to TwitterShare to FacebookShare to Pinterest
Labels: 0904, guitar