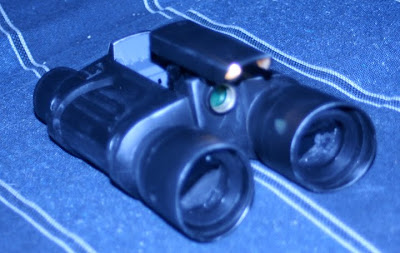 These are the "night vision" goggles we have for Day 2. Brian Schiavo is responsible for them. But that's not what I'm here to talk about. 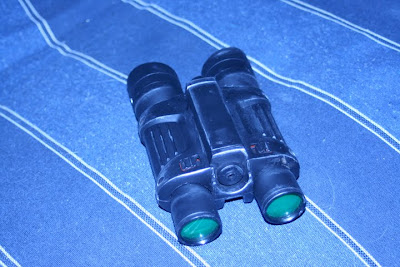 So we drank this bottle. But beforehand I went to Bushwick, Brooklyn, and shot this footage of the fabulous Tom Rowen on a roof. We're testing locations and color-correction here.

But then David insisted that his notes come with liquor. And they did. So we have liquor.

Even drunk you could mention what your test shots are shot with, bastard. :)
You know, for us techies.

Hey, it says if you click-through. ;-) But OK. It's a GH1 going through Neoscene so the files become Quicktimes and then hit with Magic Bullet Looks to create that crushed and desaturated look.

If I click through what? I watched the vid and didn't see it. Come on, talk slower for us old people.

If you click the word "vimeo" it'll open a new window and embiggin the video. It's not that necessary though, because I've told you everything I know. I do mean everything.