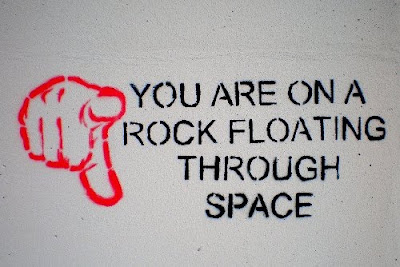 On occasion I'm asked to actually direct one of the motion pictures I'm making. Yeah, right? I know!
Last night, for instance, an artist asked me to tell him what my vision for the giant robots was. In haste I made up some crap in order to keep Ian from reaching across the entirety of these United States in order to strangle me. But it occurred to me later that typically that's not generally how I work.
For instance: the fact is that the edit which becomes our final, locked edit is well over 80% what the editor delivers, untouched by me. I don't, for instance, do a first cut and then let the editor at it afterward. The editor is usually the first (and last) person to touch the cut. Sure, there will be bits and moments where I'll be all "Oh, I had a specific idea about how that might work" and I'll go and do a cut of that part (like the opening of Alien Uprising being so dang slow and Alien-y). But by and large it's someone else's cut of the scenes and how they work. Sure, I shot the thing, but the thumb prints of another artist are all over it.
I'm much more interested in what the artists we work with have to say than I am at what kind of malarky I can make up. The style and the tone of the costumes in Clonehunter came from Carly Hirshberg. She did indeed ask me what my vision was and I said something like "duh... I dunno..." and she came up with the ideas for how Vinnie would wear a turban and Angela would get this hot space/hooker/assassin look (actually, I may have suggested something along those lines, but you know what I mean.) Sure, I could say that the look we're going for is "Cyberpunk meets Manga but, you know, classy" and it would be just as meaningless as anyone else saying it (because what look ultimately couldn't be described as "Cyberpunk meets Manga but, you know, classy"?)
What's strange is that since I've been getting less specific about the design, the design and photography of our pictures has gotten more specific. At least that's the way it seems to me. Mmm... actually that's what other people are telling me.
In any case, sometimes I actually have to make a decision. Like today's decision: the movie's blacks are going to go to green, the highlights to blue, and there will be diffusion. The blood spurts in the picture are going to primarily be 2D spurts that hit the virtual lens. I'm on the fence about turning up the shutter for fight scenes. Aw heck, no, the shutter will remain at 48/50. There.
at 2/18/2010 12:34:00 PM

Just please don't go the way of the current trend...choreography beats shaking the camera in close up so the only way you know what's happening is via sound effects. (See: Nolan's first Batman, and most other current action movies for demonstration)

Big pet peeve of mine.

I'm thinking we're going to start with big, gratuitous wide shots to establish the geography, and then go to handheld for the actual impacts and violence.

Yeah, I hate it when there's an action scene and you can't figure out where the heck anybody is.