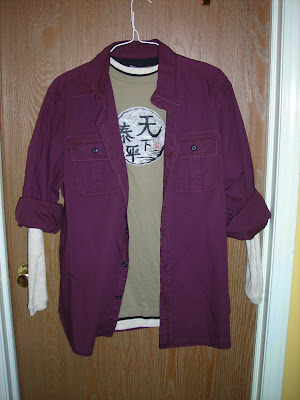 Tomorrow is the first day of Day 2. And today I'm delivering Clonehunter to the lab. Again. So we're rolling these puppies out one right after another.

There's always a bunch of running around that's done just before we shoot and surprisingly, it actually calms down after the first day. Firstly, if you have a whole mess of people (actors) on set the first day (we shoot 5 of the 7 characters with speaking roles) we have to have them in costume. Also, there are things like signed contracts and the like which have to be kept organized and suchly.

I suppose on a bigger budget production we'd have someone from the production office make sure that contracts were taken care of and fittings were already done and there'd be a wardrobe person on set and etc. But we don't. So we don't. ;-)

This is Tom Rowen's shirt for the role of Eric. The brilliant and radiant Virginia Monte is our costume designer. I love the whole Firefly-ness of this shirt. Two years of high school Chinese have effectively failed me. "Underneath" something. Anybody read Chinese?*

*I spent the entire time trying to convince Mr. Callanan to tell us about how he parachuted into Burma with the OSS in WWII but he never took the bait. Students from older classes allowed that you could get him to reminisce about it but he never did with our class. My Chinese accent is simply terrible.
at 3/01/2010 10:06:00 AM