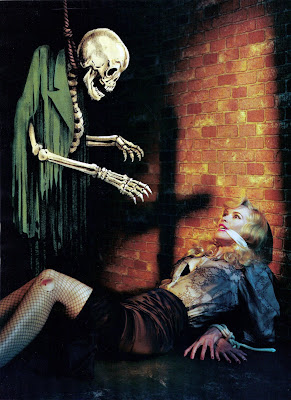 Rubber crowbar, $70. Seems to be something we always need.

So I worked with this screenwriter once, Anthony Jaswinski, http://www.imdb.com/name/nm1097510/

he said something really interesting to me: he always tried to find the name of a movie from something in the script. So I generally try to do that myself. I found this in 0801 (Dominion):

Any notes or ideas? I think that's the new title.

This article from Hot Rod Camera indicates that the big issue with the video compression on the GH1 is that the blacks are dead with no detail. Well, we're used to that. The only thing I like to bring up is a bit of gamma after we've sunk the blacks.

Here's what they say: "the GOOD news is that you get a decent amount of contrast with the image in some of the user selectable ‘film modes’ (including “Standard”) up to nearly 10-stops (about 2.5 over, and 7 down) if you can maintain your shadows to highlight contrast ratio- and keep skin tones more or less in the middle, you can keep a lot of detail/information, and then can confidently move those levels around in post."

I think it doesn't really matter because the autofocus is the killer app. That's ironic 'cause typically professional film production is against autofocus. Indeed there is a whole a job category called "focus puller" whose job it is to make sure the movie is in focus, we don't need a machine to do it. But Pandora Machine can't afford a focus puller. Frequently our crew is 2 -- a producer and a director. The GH1 will allow us to do moves (walk and talks, push ins, complicated dolly movement) which we avoid right now. That right there makes our decision about which camera to get for us.
at 10/23/2009 12:27:00 PM

Email ThisBlogThis!Share to TwitterShare to FacebookShare to Pinterest
Labels: 0801, gh1

And usually the producer is trapped under a cat or something and isn't really too useful to have around.

I dunno. Being trapped under a cat seems pretty useful to me.