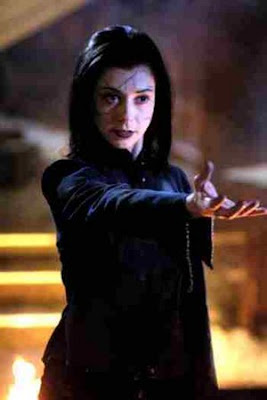 OK, so my addictions are fairly simple. Or perhaps they are my compulsions... it's hard to tell. When I started with the unaired pilot of Buffy the Vampire Slayer I... well I just had to finish watching the series. That was about 108 hours of my life.*

OK, so this is one of the more brilliantly written series on TV. I have a whole bunch of reasons in my head about why "genre"** is a better dramatic form than non-genre, mostly having to do with how you can deal with bigger issues than you can without monsters or ghosts. I mean, where would The Tempest, Macbeth, or Hamlet be without them?

Still, the show isn't perfect. The way television works -- with act breaks which must occur within a minute or so of their appointed times, the length which must be within (sometimes) a 30th-of-a-second of its appointed length, something's going to fall down eventually.

The worst thing for me though is those 22-show seasons. You can't make all those shows the quality they ought to be. Some of them are going to suck. Obviously the writers on these shows are the baddest of the bad. They can write their way out of a paper bag, write themselves into another paper bag, and write their way right through that one. But breaking 24 a year? That's just too much material -- your characters don't have that much to say.

Still, the Buffy series is by far one of the best. There's even a shocking about of academic literature on it (I'm reading "Why Buffy Matters" now.)

And I figured I'd try out Firefly. It's odd that I've never seen all of Firefly -- after all I'm science fiction fan. Heck, I even made a sci-fi Western picture myself (Solar Vengeance). So I figure I'll download some of it from the Interwebs (it's either that or I get the DVD's from the library). And man, there are a lot of servers with Firefly on them. The dorkuses on the peer-to-peer networks loves them some Firefly don't they?