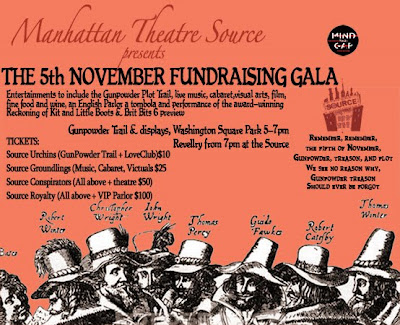 So my theater, Manhattan Theatre Source, has finally updated their financial position. From a mass email I got today:

"Manhattan Theatre Source is delighted to announce we are in a position to sign a lease for five more years here at 177 MacDougal. We couldn’t have gotten to this point without you. We have plans for the future and need your continued support as we go forward. We will be holding a Fundraising Gala on November Fifth and hope that you can share in the revelry. For details of this and our exciting 'November News' season, read on..."

That's not exactly what happened. What really occurred was the fact that there was no crisis at all. Again. Instead, they didn't make a cash-flow projection and were relying on their bank account balance to determine if there was a "crisis". This would be simply unfortunate except that they've made this mistake at least twice before. And I fell for it now twice. (I mean three times -- including this time.)
*****
But let's see... how could it be worse? Oh wait, I know! Use an anti-Catholic holiday as a fundraiser! Awesome!

I was aware that the (now unneeded) fundraiser was being held on November 5, and that some moron had posted a giant ugly sign in our front window saying "Remember, remember, the 5th of November" but what I hadn't realized was that we were actually making the theme of the fundraiser a "Gunpowder Plot/Guy Fawkes" fundraiser. Awesome.

The Reichstag fire of British anti-Catholicism is the theme of our fundraiser. I'm just disgusted and this blog post is me and my company, Pandora Machine, officially dissociating ourselves with the event.

I've written to the Board of Directors but they haven't bothered to respond. Maybe next year we'll have a Kristallnacht fundraiser -- won't that be fun?

For extra credit here is a fun fact: George Washington banned the celebration of Guy Fawkes day by his troops because it was anti-Catholic and anti-democratic. Unfortunate for us then our new management wants to bring it back.
at 10/16/2009 10:34:00 PM