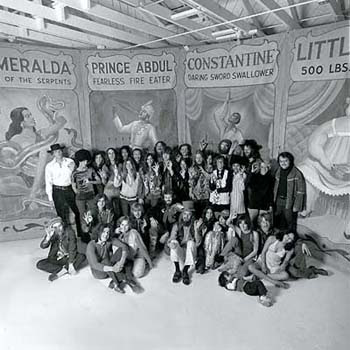 OK, OK, so the QOM (who doesn't like having her name posted on this blog because God forbid any future employer google her) was in California and she was on a train platform near Palo Alto trying to get to the San Fransisco airport.

The train was being late and running on an unposted schedule. She kept going back and forth to the telephone in order to call a car service but there weren't any car services which would actually come get her and during all this she struck up a conversation with an older guy who was hanging around the train station ("I just like to watch trains" he said) and he offered her a ride to the airport.

So, being a better judge of character than she is of her own character, she accepted. They got into a conversation about how he used to be a photographer and did album covers in the 60's and 70's. She got to the plane on time and when she got to New York she looked up his name. Jim McCrary (apparently he looks just like his self-portrait on his site.) He did some album covers? You don't say? Like any we might have seen before?

Oh, how about this one? The longest charting album to date by any solo female artist. You might have heard of it.