The police came, they checked our weapons. They were impressed -- the guns are non-firing plastic toy guns but our man Brian, who can seemingly do anything painted them and souped them up so they look weathered and real.

We had one officer on the ground and another on the roof. But that wasn't till we got to Bed Stuy. Firstly:

Tom Rowen and Dani Quisenberry on a fabulous roof in Bushwick. They're watching the robots. The robots are coming. It is not, nor can it come, to good. 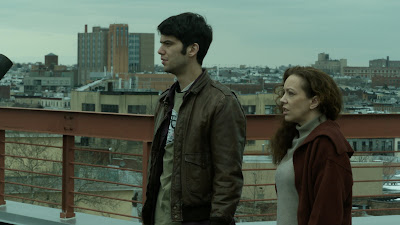 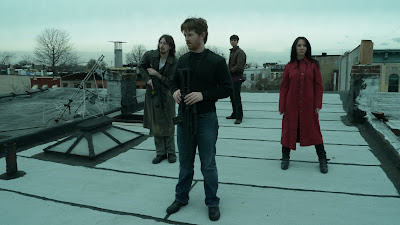 What did I learn? I learned that the Panasonic GH1

This is my new rock band. From left to right that Nat Cassidy, David Ian Lee, Tom Rowen, and Tina Tanzer. 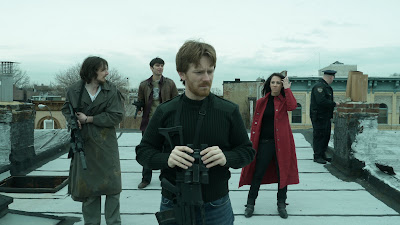 Nat, Tom, David, Tina, and officer Rob (officer Bill was downstairs)! Note that only one of the four guns in this picture is real. 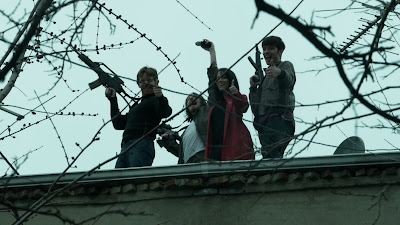 A Moment To Remember: A certain cast member pulled down his pants and mooned us. No effect on the rest of the cast. Nearly blinded the neighbor walking by.

Yeah, where is TCD when you need 'em!

looks good andrew. remember to give your cmos chip tie to cool. seminar i went to with one of the local suppliers said they saw most of their warranty repairs coming in from people burning out their cmos shooting too long on video.

I know the Nikon D-90's have that chip issue -- they'll just stop you from recording at all. But I was kind of under the impression that the GH1 could go all day. A friend of mine does documentary-type stuff with his and he rolls ALL the time. But I'll keep an eye out and fingers crossed.

So how do you zoom smoothly with still lenses? (are there high-quality ones that do that?)

And isn't manual focusing kind of hit or miss with those lenses?

I tend not to zoom inside a shot. I only have one still zoom lens. Focussing with a still lens is hard, racking is kind of a bitch, but it's possible.
The whole point of the GH1 is that it has a usable autofocus while shooting motion-picture. That saves us on an AC. If you leave the autofocus on "continuous" when you have a still subject, it'll "hunt" between their eyes (which is obnoxious) so I go back and forth between the "continuous" mode and the "just get it at the top of the shot" mode.