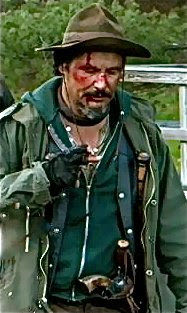 I just saw a not-quite-locked cut of Jim Mickle's Stake Land. Jim's the dude who made the brilliant little horror film Mulberry Street a few years ago. And now he's in post-production on this amazing feature -- a post-apocalyptic vampire tale which looks huge and expensive. Nick Damici is the writer and the lead (same roles as Mulberry Street) and he's just perfect as the badass Charles Bronson - type vampire killer of the future.

A very dark and grim future.

I was really blown away by the scale of this picture. Jim's a genius at squeezing every little dime spent on a movie and making it look huge. I was expecting a brilliant little picture from him. What I saw was a brilliant BIG picture. He not only filled in the world to make it real and palpable, but used the camera -- moving it, keeping it still -- to create this wonderful sense of movement throughout the story.

One of the advantages of living in New York (and having cool friends) is to get to see stuff like this. I watched it with our grip/sound/editor all-around-dude David Frey. David made a fascinating point about how one of the scariest moments in the whole movie is not even a jump scare. It's a vampire you see coming from a million miles away. She just walks into the room and... it's super-creepy.

At the end Jim handed out questionnaires. (Wow, we never do that. I'm serious -- the first time I actually saw Clonehunter all the way through was at the cast/crew screening!). But anyway we all gave notes and I told him I didn't think the sequence in the middle where the rabbit kills all the knights of King Arthur really worked if Jim's reading this, I'm the one who rated Stake Land in a scale of 1 to 10 at "One million". I'm comin' clean on that one.
at 3/30/2010 12:23:00 AM