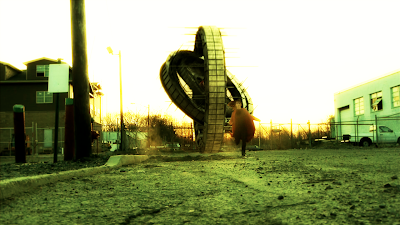 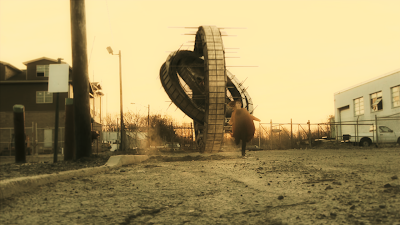 Is all over Project London.

And I'm watching Hide and Creep again. That movie just gets better and better every time I see it.

Jeff Lipsky tells filmmakers what they want to hear: that theatrical distribution is viable for indys. That don't make him wrong, but he do have a dog in the race because producers who believe theatrical is viable will pay him to distribute.

Is it me or does this not seem like a whole lot of revision? Maybe I'm just used to beating up writers so I'm inured to it.

You know what I learned from Hide and Creep? That Southerners can say the word "man" and it doesn't sound ironic or stupid. If you have a Midwest accent (like me) just stop trying.

Thanks! This was the image I had in my mind when I first came up with this giant-robots-after-the-apocalypse thing.

Looks cool. Wanna see some motion. And a giant blood streak where she used to be.

Even if it doesn't happen in the movie. Make it for me!

looks pretty cool! i prefer the less green version. and yeah totally need to run an actor down and have the ragdoll remains flung into the air in the wake of the rolling robotic monstrosity.

See, you've already solved potential problems! Or at least do it as an easter egg on the dvd(hey, look at me working in the holiday!)