How I love thee Danielle Quisenberry 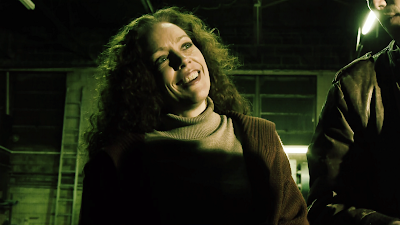 We had this role, "Jean" (named after my sister), which was a very difficult part to cast. The character is a tough but warm woman who was originally written to be "of a certain age". Well, Danielle is such a fantastic actor we couldn't help but to cast her, even though we had to re-think the role to make Jean much younger with Danielle in it.

The Queen of Mars had, I believe, worked with Danielle before and said we should talk to her and I'm so glad we did. She has a really great voice and physicality and she really put up with the abuse and rigors of the way a production like ours shoots.

Danielle has this amazing scene where she tells the story of the end of the world. I kinda like the scene because it's fun how she describes meeting the other characters after 99% of the world is dead. She knocked the scene out of the park. I mean, real tears-in-your-eyes knocked it out. And then we did it again just because I wanted to see her do it again (don't tell her I said that though). It was really that beautiful.

And it really gives the picture a boost. I just love it when actors make decisions that I wouldn't have thought of myself and are vastly better than anything I could have thought of myself. That's what really imbues the movie with the sort of emotional reality in these fantastical situations that we, the audience, really love. And she created the character with the detail that makes her Jean come alive.

The character "Jean" has absolutely nothing to do with my sister Jean but I can't wait 'till my sister sees it!

I cast Danielle and Nat in my production of 'Good' at the Source in 2006.
My finders fee will be invoiced to you shortly.
p.s. congrats on the distribution deal for 'Clonehunter'!!!

So it's YOUR fault! I knew we'd find someone to blame.