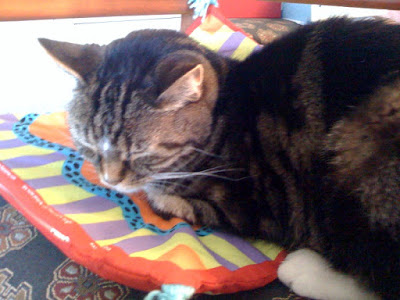 Pushkin loves his catnip pillow. My sister took this picture of him.

David Mamet on drama. As a follower of Blake Snyder's Save the Cat I believe that Blake's "Pope in the Pool" is a better way to think about exposition.

But Mamet does have my favorite quote about what a director's job is:

"SOMEONE HAS TO MAKE THE SCENE DRAMATIC... IT IS NOT THE DIRECTORS JOB. HIS OR HER JOB IS TO FILM IT STRAIGHTFORWARDLY AND REMIND THE ACTORS TO TALK FAST."

And you gotta agree with this:

"ANY SCENE, THUS, WHICH DOES NOT BOTH ADVANCE THE PLOT, AND STANDALONE (THAT IS, DRAMATICALLY, BY ITSELF, ON ITS OWN MERITS) IS EITHER SUPERFLUOUS, OR INCORRECTLY WRITTEN."

What's not helpful about his advice? That his answer is "figure it out". Yeah, that's just not meanin' nuthin' at all. It's a big problem, you don't want your actors saying their subtext yet you need to convey information. You need conflict in every scene yet we have to have some understanding about what's going on. It's hard to do. Mamet knows what the problem is, he is capable of getting around it himself, yet he doesn't seem to actually be able to explain how to solve it. Interesting.

Email ThisBlogThis!Share to TwitterShare to FacebookShare to Pinterest
Labels: Moviemaking in General, Pushkin

True. Though as it's a memo to a writing staff of a broadcast TV show, they damn well better have an idea how to figure it out. Or, shucks, I'd be happy to take their place and give it a shot.

Wait, they were canceled. So make that past tense, then.

And he's probably not giving the network executives enough credit. They're probably right when they're asking for things to be clearer.

What I frequently do is put dialog that's on-the-nose in brackets.

LISA
[So if I go for the gun on the floor, you're going to kill me.]

That tells the actor what to think, but just not to say anything. It also makes the script a bit more readable.