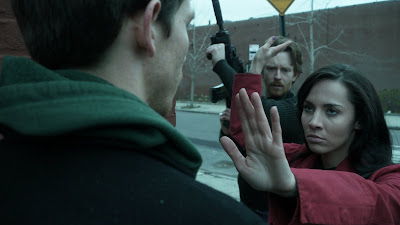 ("Sgt. Steady") are both stopped from killing one another by Tina Tanzer ("Laura").

It's dark but this is Tom Rowen, Laura Schlachtmeyer, Tina Tanzer (back to us), Nat Cassidy, David Ian Lee (not in costume), and Maduka Steady. Setting up a shot. 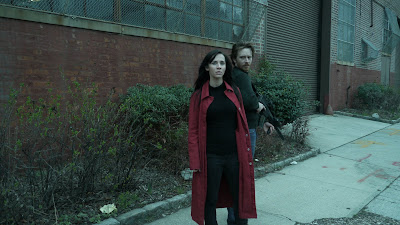 It turned out it didn't really rain on us as I thought it would. But we did end up shooting (only our second time) with my Canon ("prime") lens set (at f2.0 and f1.4). That was at the end of the day. 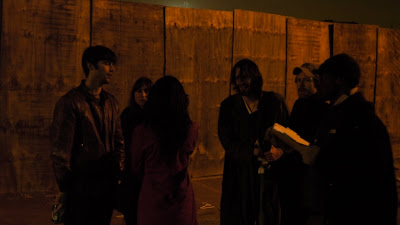 TCD was just fantastic for us. As I've mentioned before, we need them because the characters walk around with guns.

And we accidentally found an amazing location. It's right on the Gowanus Canal and is near where the F train is elevated (where I thought we'd have to shoot a lot of tonight because of rain.) I don't know why I'd never seen this street before (the dead-end of Huntington). And appropriately the sign at the end of the street tells us where we are in our shooting ("END") 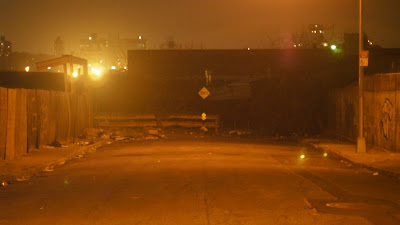 Later, we went out for drinks. I had two zombies. Ha! See? It's a zombie picture! Get it?!

Oh, and we had the odd experience, which David Lee had to remind me to do correctly, of wrapping all four of the leads on the same (last) day of shooting. The reason I messed it up is because that's very unusual. Typically you don't have everybody wrapping on the last day.

Everything was quite lovely for us. The skies opened up and started raining just as we got back to holding (the apartment of the Queen of Mars.)

I really couldn't be happier with everyone who worked on this movie. It's been such a touching experience to have all this great energy around. I want to raise my children with you guys. Or at least my cats! ;-)
at 3/29/2010 12:09:00 AM

I don't like the fact that this whole thing went through smoothly and without much problem.

I like my production stories to be wrought with tension, actor drama, and NON-STOP PROBLEMS.

Uh. It was really noisy outside wherever we shot and we'll have to ADR everything.

But of course we knew that going in so I guess it wasn't a problem.

The actors ate a lot of chicken wings. And on occasion the director was drunk. Well, three occasions... that I can remember...