Secrets about our cast and crew 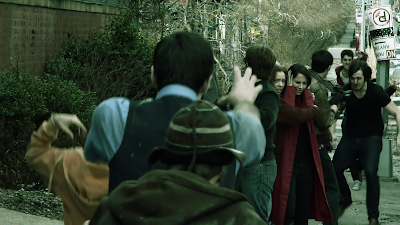 I sent out a questionnaire to the cast and crew of Day 2 before we began shooting. The questionnaire covered things like "What is your legal name?", for the contracts and "What is your shoe size?" for the costume designer, as well as asking about dietary needs and wants, etc so we would make production go along smoother. But the last question is:

"Giant robots have analyzed your DNA and discovered that you are not human. That is because you are:"

And I had some pre-fabricated answers which they could click on, or they could make up their own. A shocking number of them were made up. Here is the list of responses. Please match each response to the appropriate cast or crew member:

If you correctly match all cast/crew members to their own answer, the FBI will visit you personally, followed by an alien abduction. Unless you are, in fact, a Mark 3 combat android.

In which case please remember that I've always loved our robot overlords.

Did I say "overlords"? I meant protectors.

Plus also too we're working on this series of shots with Tina and Kathleen:

Untitled from Ralph Boswell on Vimeo.

Looking good. Of course, a few more VC tutorials will have that looking perfect! :)

Actually, all we're doing is taking out the shots that don't work. ;-)

I figured it was still a work in progress. Which shots don't you think work? I only saw 1 that I don't think will work without major work. (some others I just thought need minor stuff like camera shake and whatnot)

Two things about it: one is that there are two different ideas about how the shot should work (big wides with falling fire from the sky, and the behind-the-characters shot) so we've simplified the sequence and just put one of the bluescreen shots in (the behind the character's shot).

It's the bluescreen which seems too flat to me.

The shot behind them as the explosion grows is the one that I'm not buying. Maybe if it was like 18 frames of it and then cut out or something.

I think you're right. And I think it's cause they're a bit to flat in the composite and because they react too late. So yeah, we cut into the shot about 18 frames and maybe the problem is solved.

They react too late? Don't you add the effect in post, so you can make them react to your effect? Maybe do a digital zoom, a lot of camera shake(maybe even some subtle digital noise like the explosion's affecting the camera, but that might be much; have to see how it looks), and if it's 18-24 frames it'll look fine.

So you can see my confusion when you say "they react too late".

Don't you mean, our keyframe on that explosion occurs too early for their reaction?" :)

Yes, that's actually what I mean (and the opposite of what I said ;-). It should be a fairly straight - up fix.