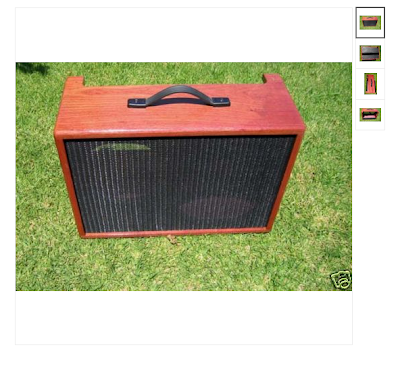 From eBay I got myself this guitar cabinet.

This is an open back custom cabinet with a very unusual configuration; it's made for two speakers: one 12" and one 10".

Now, I already own a 12" Celestion Alnico Blue. And I wanted to get a Weber 12a100 to have another "flavor" of speaker (I think like a recording engineer in that I figure I'll put a mic on one speaker -- the one that sounds the best for whatever sound we're going for or whatever.)

Boy that seems odd to me but Ethan tends to have interesting insight into such things so I'm thinking why not get a 10" Weber 10a100 and put it in the same cabinet as my Celestion?

Of course I'll probably end up really wanting a 12" Weber and a 10" Celestion but... meh. What I really need is an amplifier.

Email ThisBlogThis!Share to TwitterShare to FacebookShare to Pinterest
Labels: Conversations with Ethan, guitar

drew, load the cabinet wire in a switcher not unlike a pick-up selector on that fancy gibson les paul of yours and park a 57 behind the cabinet. mics for the front at your discretion. i preferred mis on the back of my old vox

I was thinking of driving each speaker with a different amp. I kind of wanted a clean amp going at the 10" and a JTM45-ish amp at the 12". But a switcher might make sense too.

I've never gotten a good guitar sound with a 57. I know I know everybody else is able to get the most awesome sounds from 57's. I tend to use AKG pencil-type mics (460's and their ilk). I learned that from an engineer who did a lot of death metal and he found that the best way (for him, and consequently, for me) to get good and separatable guitar sounds was with a high end frou frou - type mic (and, of course, an excellent mic preamp.)

But micing behind the cabinet -- that could be a secret to success. I'll certainly try it.