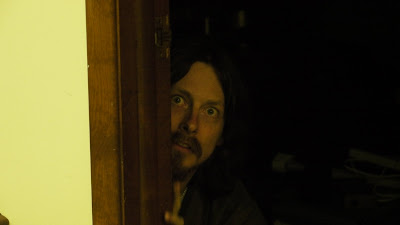 Here's an advantage to hiring an accomplished playwright to play the crazy guy with the long speech in your movie.

You see, it goes like this: the speech I had written was good. I mean it was pretty darn good. It would have gone well, maybe with a little editing in post it coulda had some shine on it.

But no. Nat Cassidy did some rewrites and focused the speech and made it clearer and more real and made the language (and the logic) better and really amped the whole scene up.

What's awesome about me being the screenwriter and the director is that Nat did all this work, and I'll get all the credit! Nobody will know that it was Nat's rewrite that we shot and not my immortal words.

People will say to me "Wow, that speech was amazing! How did you get Nat to do it?" And I'll say "The secret to good directing is a great script, and those words were in the script. Nat only had to say them." And the people will thank me and tell me how brilliant I am and they'll never know that it was really just Nat all along.