We killed Kathleen just once today. 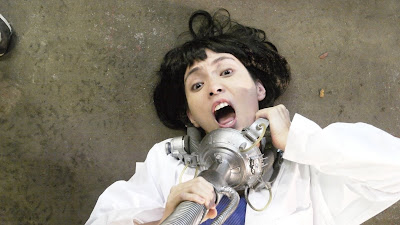 But tomorrow we get to do it again at least two more times in Day 2.

Here she is being attacked by a robot claw. Brian Schiavo of Strangewerks Films built the claw and the horrible drill that eats into her skull.

The weather is really terrible today. Train service was suspended on the Northeast Corridor line, which threw a wrench into the works as far as getting one of our actors back in time for a show in New York (we're shooting in Metuchen today). So yikes! We did get her to the theater on time though it was a tad rough. Other than that though we shot all indoors so at least we stayed dry. 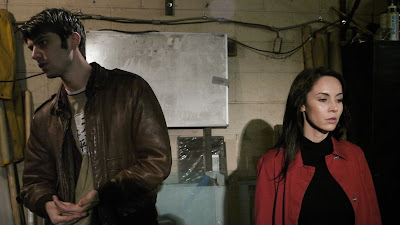 Here's an example of the incredibly sexist lighting we tend to do. Tom Rowen and Tina Tanzer contemplate the robot outside.

So in an amongst other excitements today somebody hacked my empiricalpleasures.com account -- "Dr. Jeentel" of "TeaM Geniuses". Real nice, guys.

I use the empiricalpleasures.com account as essentially a backup for this Blogger page. I can't effectively move the images over to Wordpress so I don't really know what to do with it.
at 3/13/2010 07:34:00 PM